After all of the preparations and what-not, the big day finally arrived – moving day! I should say, moving days, since it’s a two day process. (Well, technically four, if you count the driving and then the movers bringing our boxes… ) But first, we start with the packing guy’s arrival. It was so weird to have someone else packing all of our crap. Really, the hardest part was staying out of their way: 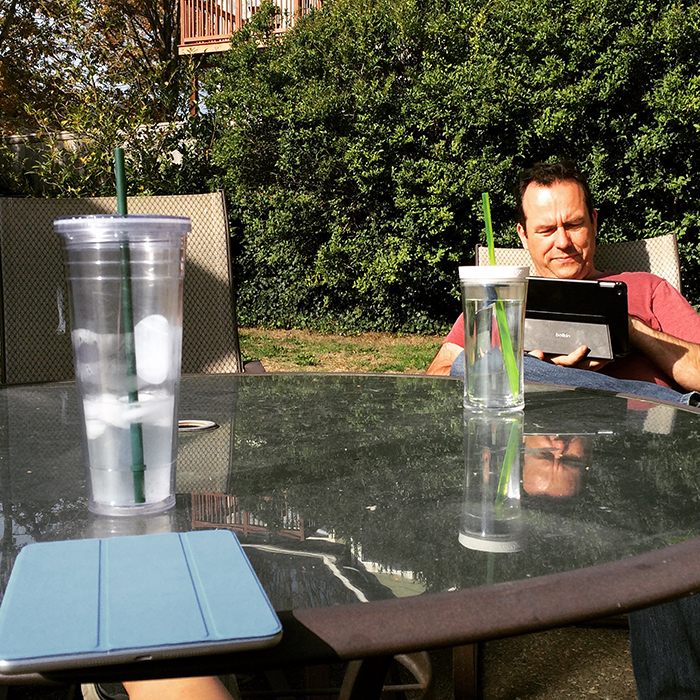 We were lucky to have awesome plans in place for the first night: surprising our friend Jenn for her birthday at a great local restaurant: Staple & Fancy. We had an amazing meal and wonderful conversation with our friends and her parents. What a great final night in Seattle!

The next day, the loading process began. Naturally, we had to add a little drama into the mix. The night before, the Element’s headlights weren’t working, so we had to run it into the mechanic to get fixed QUICKLY. So, we had just hoofed it back to the house when one of the guys from the moving company was at our door. He was the advance man before the big giant truck. We had to get one of our neighbors to move their car. (Seriously, every other day the street in front of our house is completely clear, but the day a giant truck needs to park there? Some idiot has to park in front of our house, even though there is plenty of parking in front of her stupid house. But I digress… )

They literally rolled out the red carpet for us:

It was a little stressful, because they arrived with three other people’s stuff in the truck and were a little worried that they didn’t have quite enough space for us.

Luckily, we had a very skilled packing master in charge of loading the truck:

Little by little, the truck got fuller and the house got emptier: 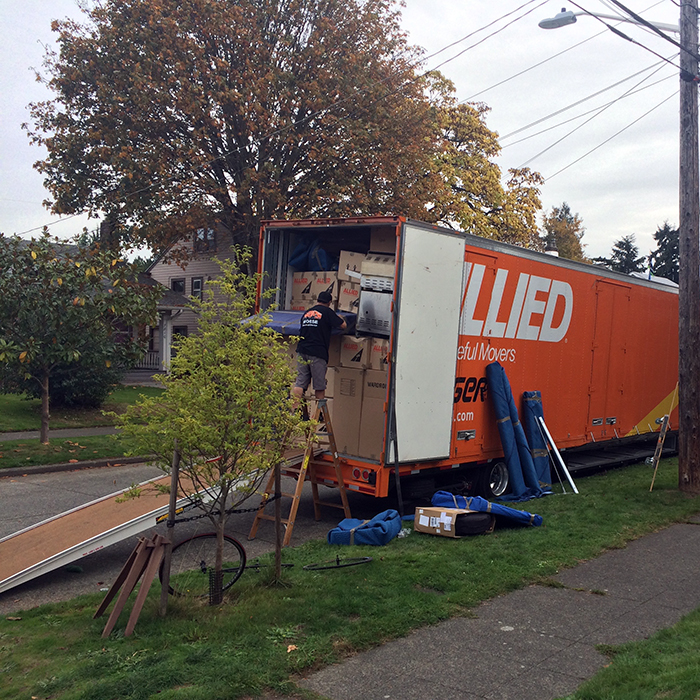 Before we knew it, the truck was filled and driving away. In a crazy twist of fate, the movers would be arriving in Oakland in TWO DAYS, so all of the stuff that I’d set aside to load into the car for us to live with while we waited for our stuff was totally pointless. Oh well! We cleaned up our little house and said good-bye to it and our wonderful landlord. I will definitely miss this place. (And Seattle, of course!)

We grabbed some dinner and hit the road. It was late when we arrived in Salem, so Susan had gone to bed, but the dogs were more than happy to stay up and greet us. The next morning, we got up and had a fantastic breakfast with Susan and then hit the road. It was a loooooonnnnnngggggg day of driving, punctuated with a few brief dog park stops for the boys to pee and run around. But before we knew it, we were pulling into the driveway our our new home!

Before departing for California, I had a few more stops on my Pacific Northwest farewell tour. First up, a trip to the Oregon Coast with Susan. Baby Austin had never been, so we felt obligated to remedy that situation immediately. And I’m not sure who enjoyed it more, us or Austin. Nope, that’s not true, it was DEFINITELY Austin and his BFF Blue: 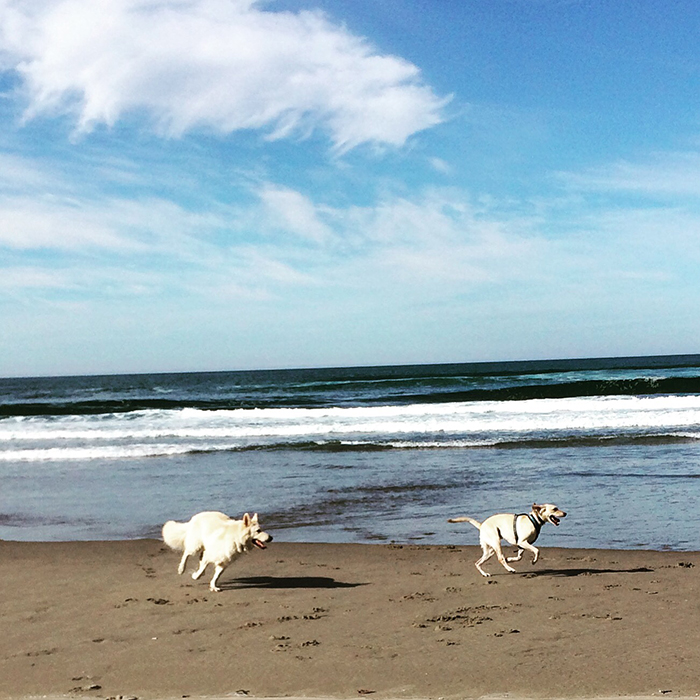 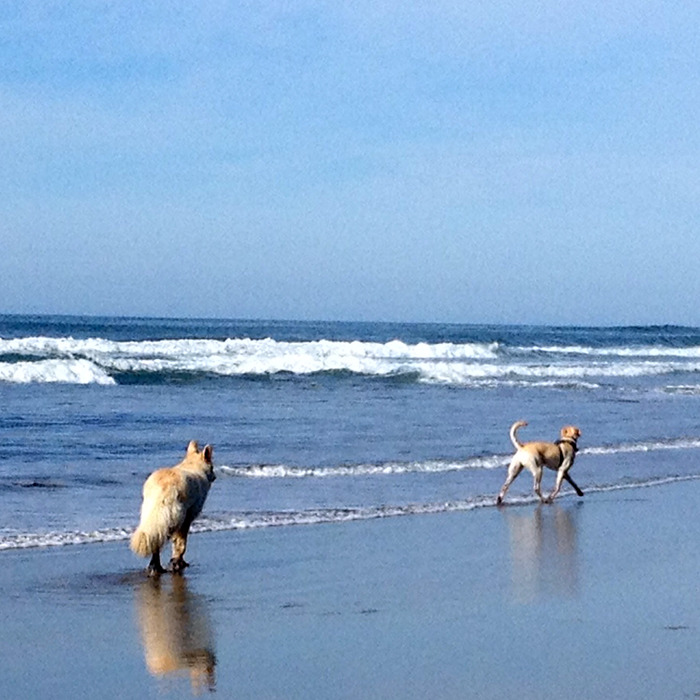 And ran some more…

It was so much fun to watch them. Austin chased birds and ran into the ocean and generally had the best time ever. At one point we saw some horses, so we put the dogs back on leash. Which was good, because they were VERY interested in those horses: 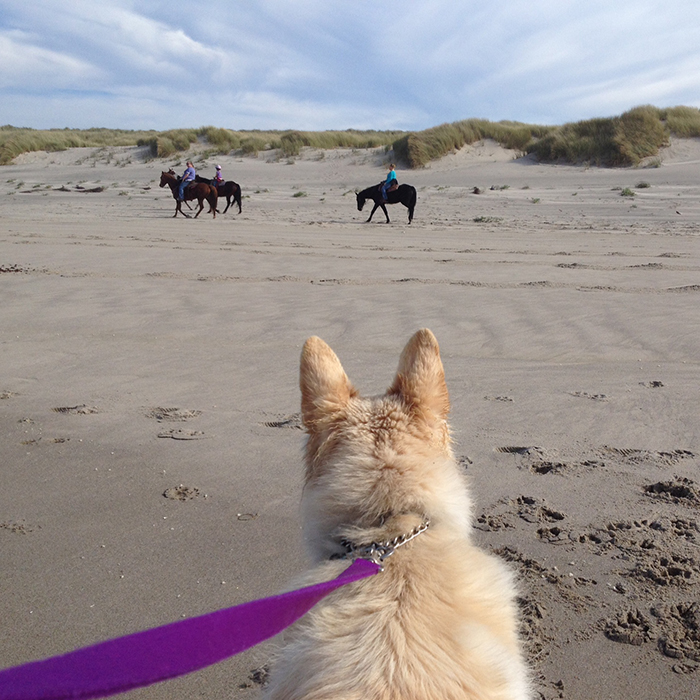 Wally didn’t get to frolic off-leash, partly because he doesn’t always play well with other dogs and because he still has delusions of his youthful strength and stamina. Because there are two of them and one of me, I had to use my hands-free running leash set up to wrangle the two of them:

We had some time to kill before our room was ready, so we went for lunch and taunted T with a sunny selfie: 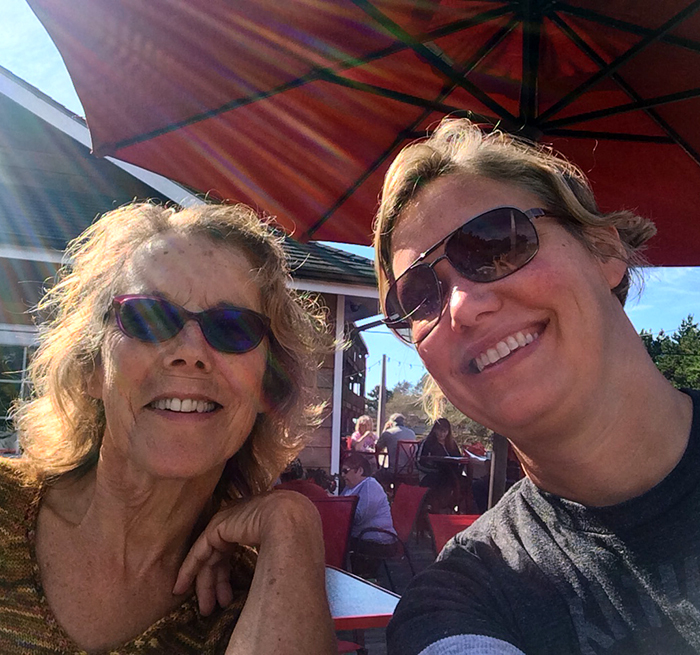 And then took the younger dogs for a second beach session. Austin was just as exuberant as ever, but Blue was definitely conserving his energy, stalking his prey: 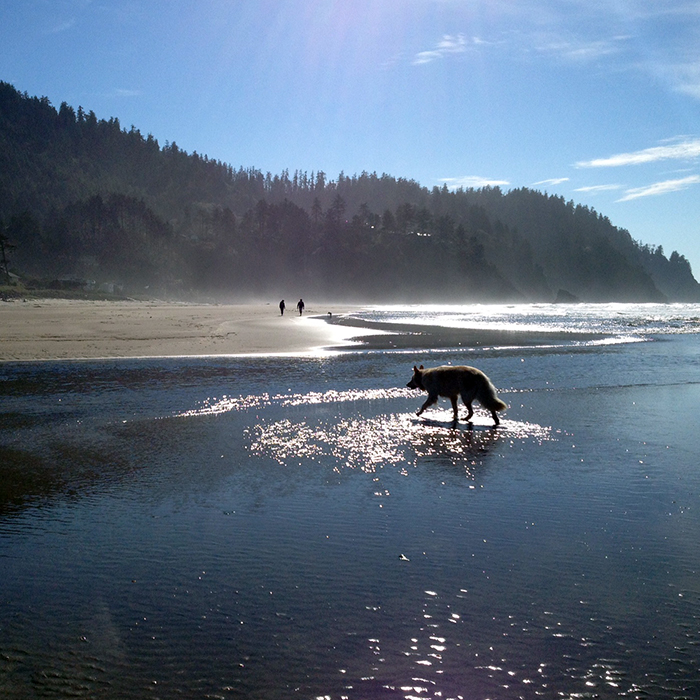 Finally, we got the call that our room was ready. We checked into a dog-friendly room with a really great view. (And shortly after I took this picture, the fog rolled in. So, it was good that I snapped it early!)

The hotel had all of these rabbits on the property. Austin was OBSESSED with them.

As were Blue and Lola. Wally was too busy sleeping off the beach time… It was like Doggie TV: 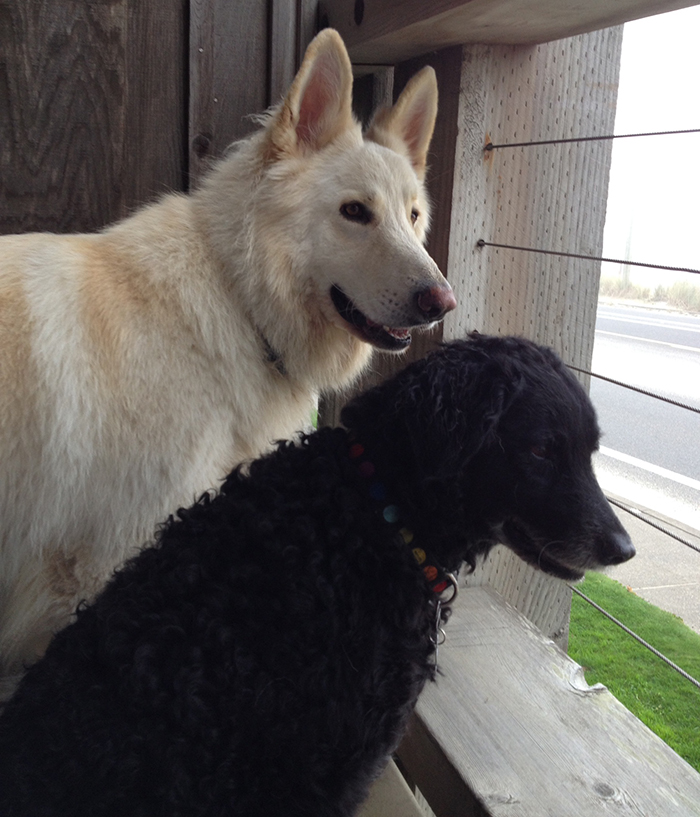 Susan and I drank wine on the balcony and then walked across the street for dinner. It was fantastic end to a wonderful day. The next morning, we went for a nice breakfast and photographed some local “art”:

Then it was time to drop the dogs off with Susan in Salem and move on to the next phase in my trip: visiting Erin & David in Bend. I hadn’t been there since T’s race last year, so I was excited to see them and catch up. I arrived Friday night after a long day of driving for me and a trip to Vegas for Erin, so it was a chill evening of wine and chatting.

The next day, we started our morning by taking the dogs for a bike/jog. They have a contraption where you hook the dogs into a frame near the front wheel of a bike. The dog runs and you ride. It’s super fun and a great way to tire out dogs quickly! Then we went to lunch, followed by a distillery tour/tasting.

The tour was interesting and apparently all stills are really cool and steampunky:

I liked the way they did tastings. First, they give you this sheet and you can pick six things to try:

Then they place them on the sheet, so you can keep track:

They also do small, inexpensive cocktails that feature the various spirits. It was such a great way to try the products. (Not to mention, a very fun way to spend an afternoon!) David had to work, so Erin & I went to see the movie Grandma at this super cute little theatre. (We both wanted it to be better than it was… ) Afterward, we had a light dinner at this great restaurant (with the creepiest waitress!) It was so great to catch up with Erin and a super fun evening.

The next morning, we went out for a hike. Bend is a fascinating place. We started out at this really cool volcanic park:

Then we drove to another section that was still volcanic, but with more forest: 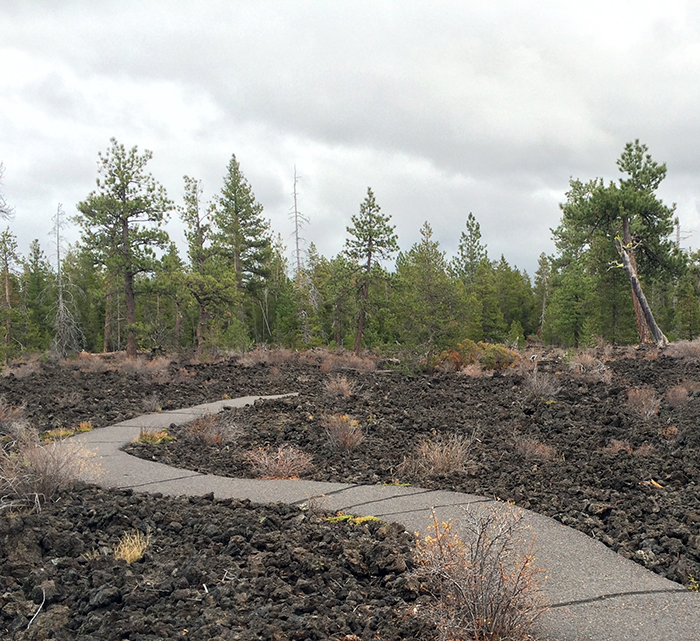 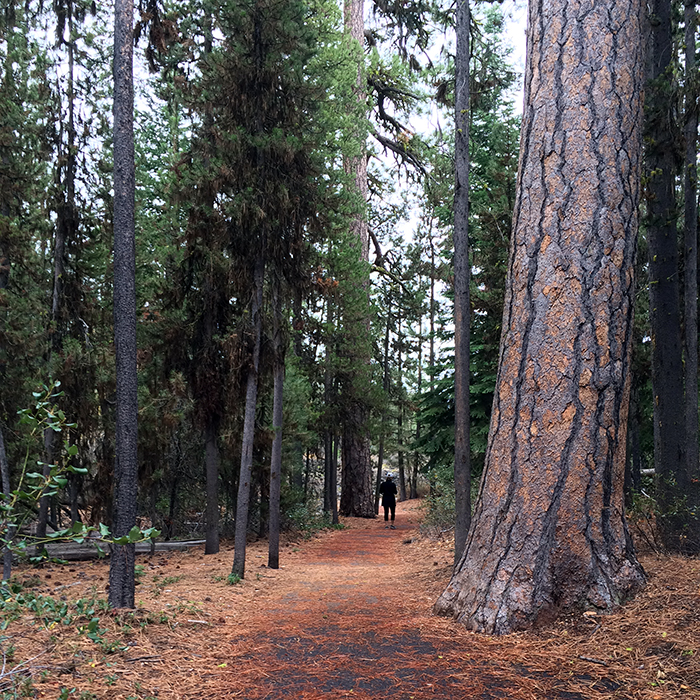 Erin climbed onto a rock to take a photo, but of course that meant she had to get photographed. Naturally, she rocked it: 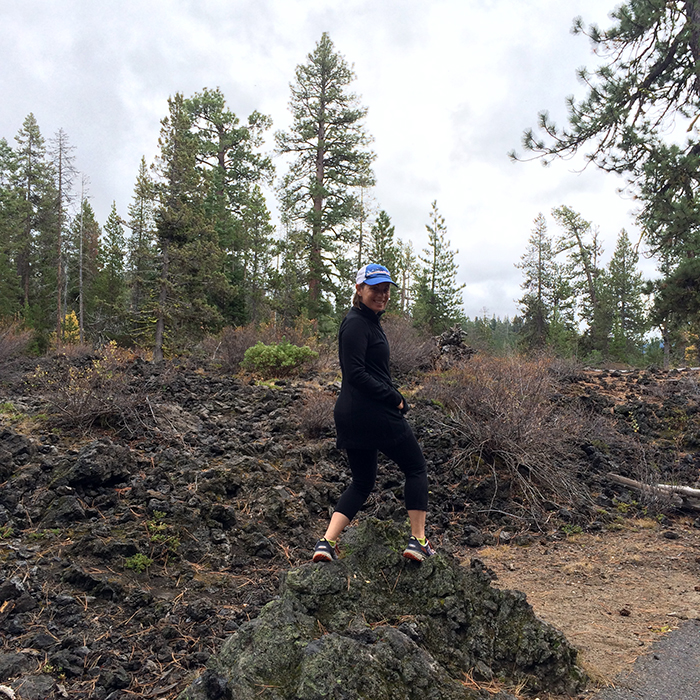 The hike was filled with all of these interesting twisted trees and cool combinations of lava and trees: 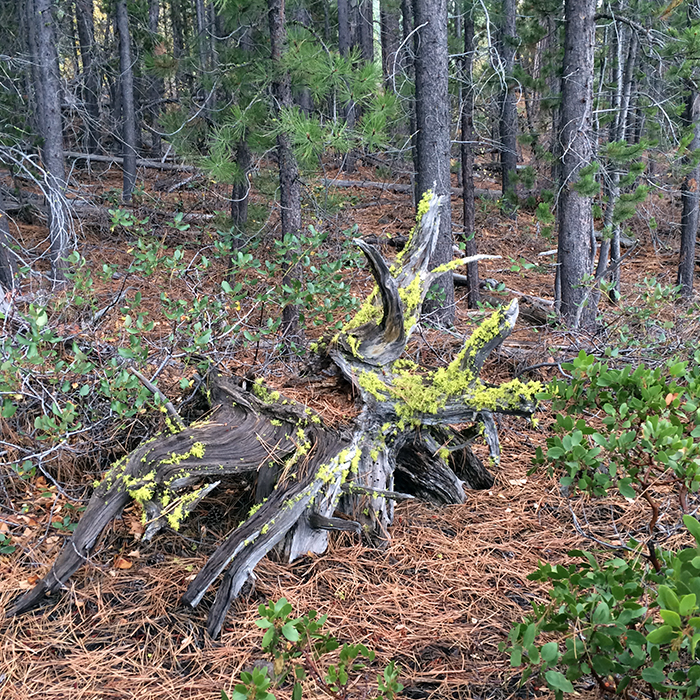 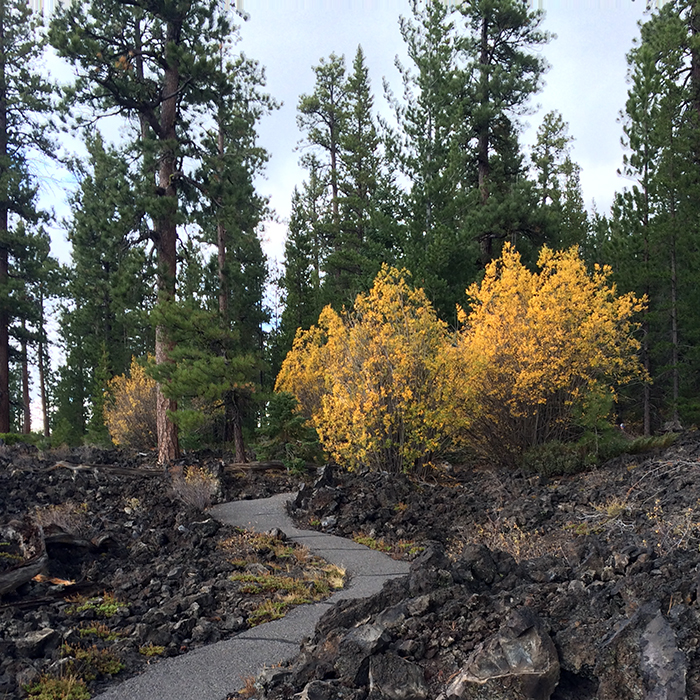 I wrapped up my trip by hanging out with my parents in Portland. It was a whirlwind, but I’m so glad that I had a chance to see everyone before the big move. As I was driving, I tried to soak in all of the natural beauty of this area and bid it a fond mental “see you later”. It’s hard to believe that soon I will be in California!

It has been a pretty crazy week. I had my last book group meeting (for The Color Purple, so we all dressed accordingly… ) I’m going to miss these ladies so much!

Then, after a frantic week trying to cram a full week of work into three days, it was time to board a flight down to California. The boy had to take a work trip down to Capitola and Santa Cruz, so he picked me up at the airport and we spent a glorious day looking at scenery like this: 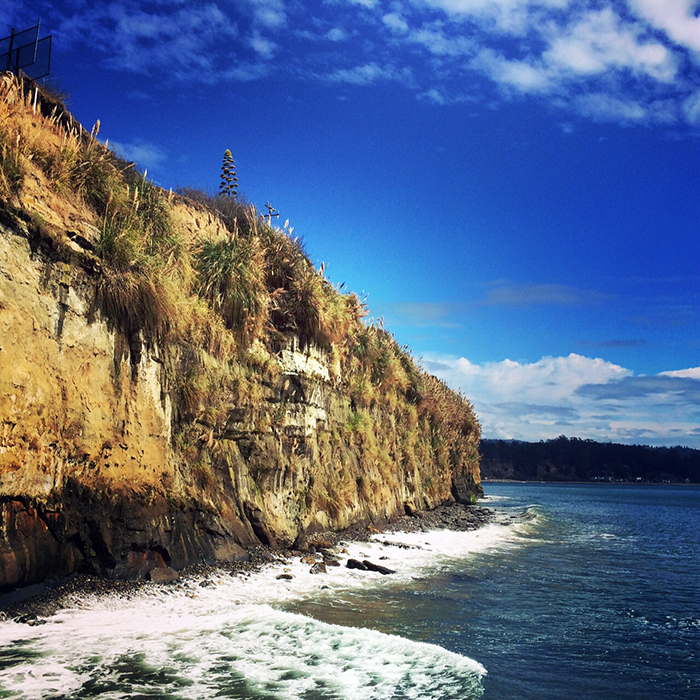 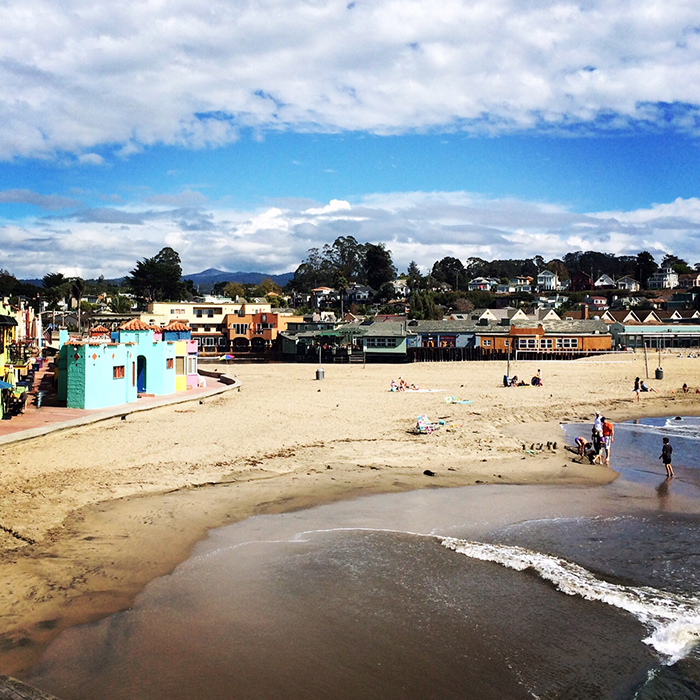 We also had to stop by a brewery in the San Jose store. Naturally, we had to sample the wares. It would be irresponsible to do otherwise…

T tries to pretend otherwise, but I think he really loves his new iPhone!

The next few days were all about trying to find a place to live. We found this beautiful place on Craigslist, so we got to the open house early and put in an application (along with a bunch of other folks – five of them in the first 15 minutes we were there… )

We then headed north to meet our old friends the Cyclones for dinner. They suggested a place halfway between our two locations, a cute little seafood place with a really lovely view: 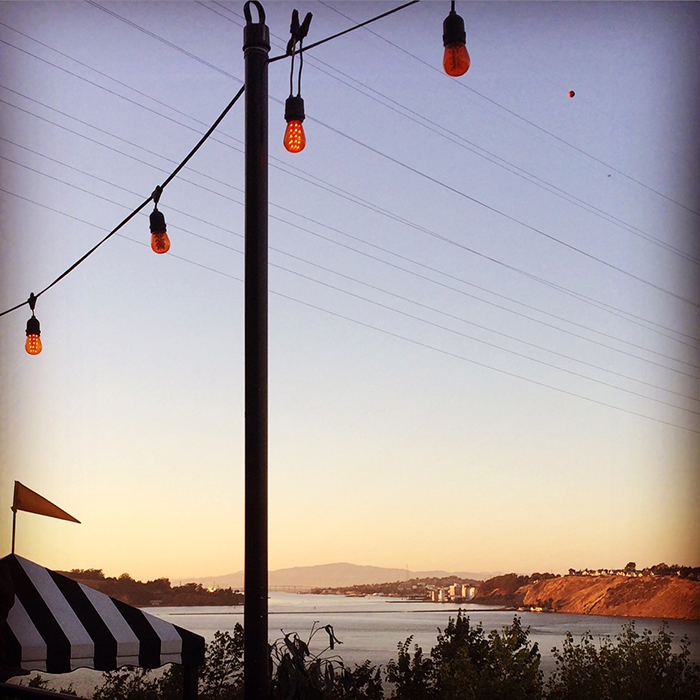 True to form, T and Jake ordered cioppino for two. They’re so romantic:

It was so lovely to hang out with them. (And a nice distraction from our lack of promising housing options… )

The next day, we tried really hard to go to an open house, but despite setting an appointment, the person never sent the actual address. We wandered around trying to figure it out from the vague map on Craigslist, but to no avail. Thankfully, we had plans with Erik & Nerissa to hang out with and take our minds off of stupid, flaky people.

We walked around Lake Merritt and then went to a really cool bar. It was nice to finally find a place that had seating for someone of my standing: 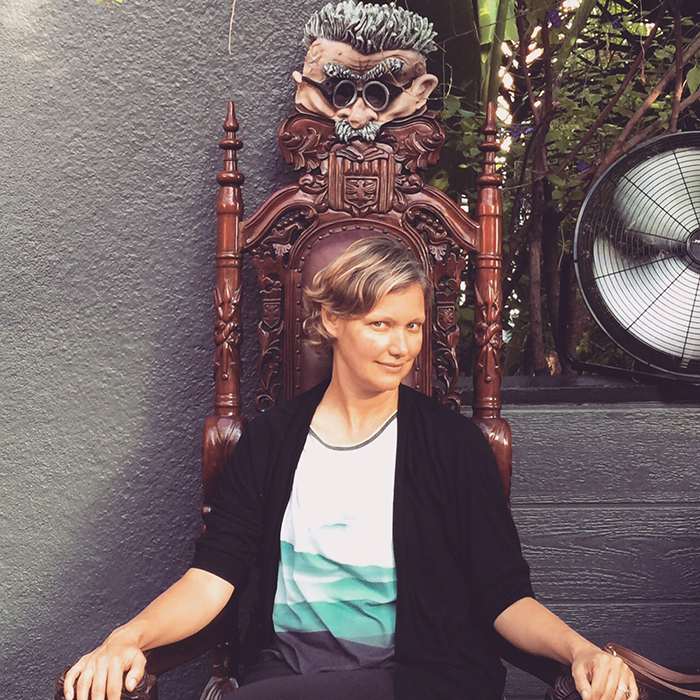 Nerissa got some great shots of the evening’s festivities: 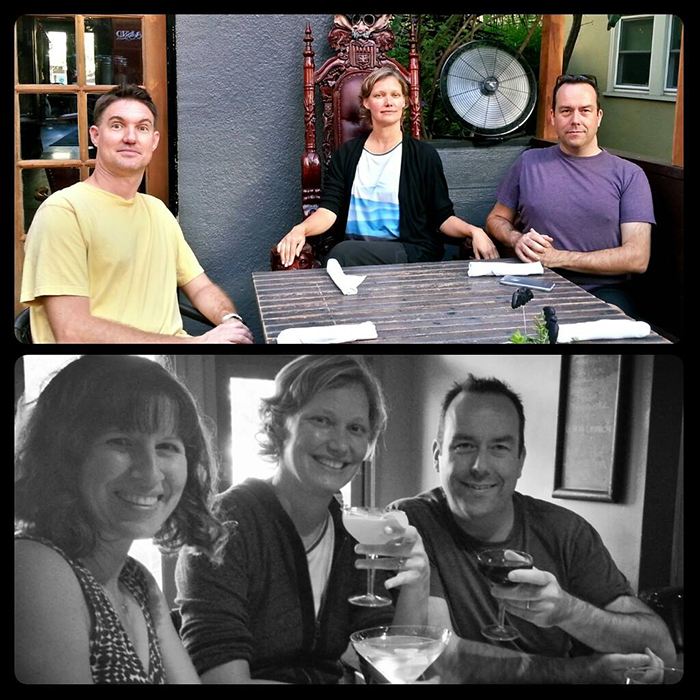 We wrapped up the evening with awesome Ethiopian food. It was a fantastic evening.

We had one open house to go to on Sunday. We weren’t super hopeful about it, but it turned out to be really nice. We actually ended up putting an application in as a back-up plan, in case we didn’t get the other place.

We decided to grab some lunch and take a break from the housing stress. While we were waiting for the restaurant to open, we grabbed coffee at a super fancy place down the street from our old apartment, across from what was once a pretty sketchy high school. Gotta love gentrification!

We went down to Erik & Nerissa’s so that T could do his laundry. While we were driving, we got a call from the second place, offering it to us. Now we had a decision to make, did we take our “safety apartment”? Or hold out for the place we really wanted?

I’ll spare you the details, but we began a harrowing week of jumping through the first landlord’s hoops to commit while holding off second landlord. But in the end, it paid off and I’m pleased to report that this will be our new home!

I have a couple more weeks to wrap things up in the Pacific Northwest, but I’m so excited to have a solid idea of where we’ll be living.