Susan came down for her first visit to our new digs. Austin was pretty excited about it:

Susan is one of those rare houseguests that doesn’t disrupt your routine all that much. She actually doesn’t want to be entertained. She wants to hang out and play with the dogs, but still appreciates the occasional outing. Like wine tasting on a Thursday. 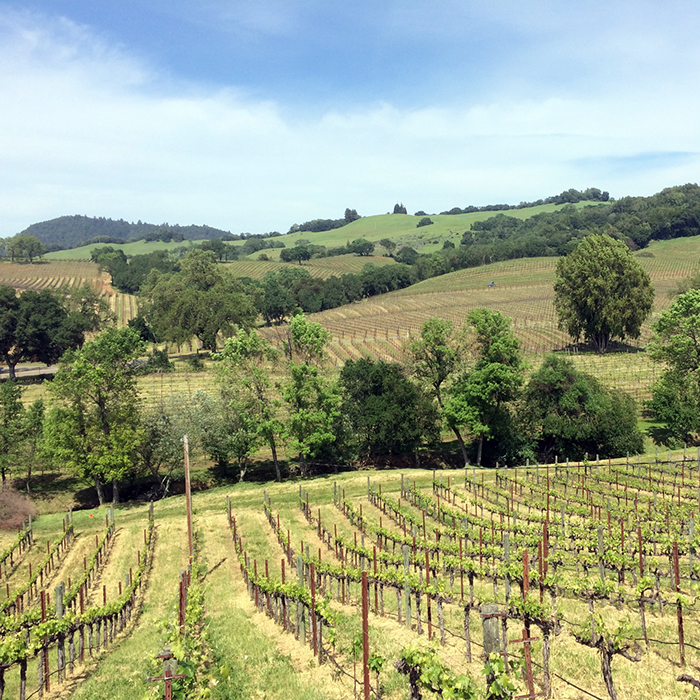 We took her to one of our favorite wineries (and picked up our club shipment.) They recommended another little winery nearby, so we decided to check it out. They not only let us taste outside… 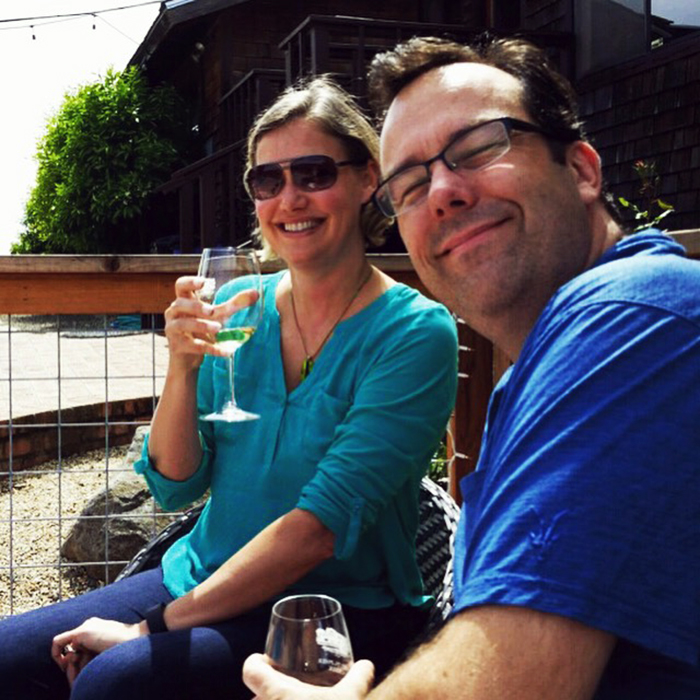 But it was freakin’ poolside! (Apparently, they have a house on the property that they rent out, which includes use of the pool area in the evening when the winery is closed.) I sense a future group outing… 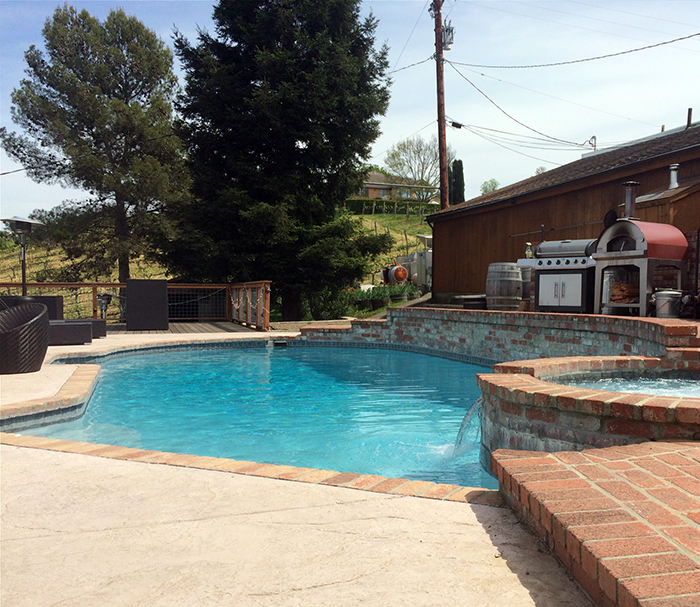 But the rest of the view wasn’t too shabby either…

Mixed in with awesome outings, Susan did a ton of yard work:

Spring has definitely sprung in our little yard! I took the opportunity to take a photo of our gorgeous roses, before they got pruned:

We took Susan out for her 66th birthday to Greens restaurant: 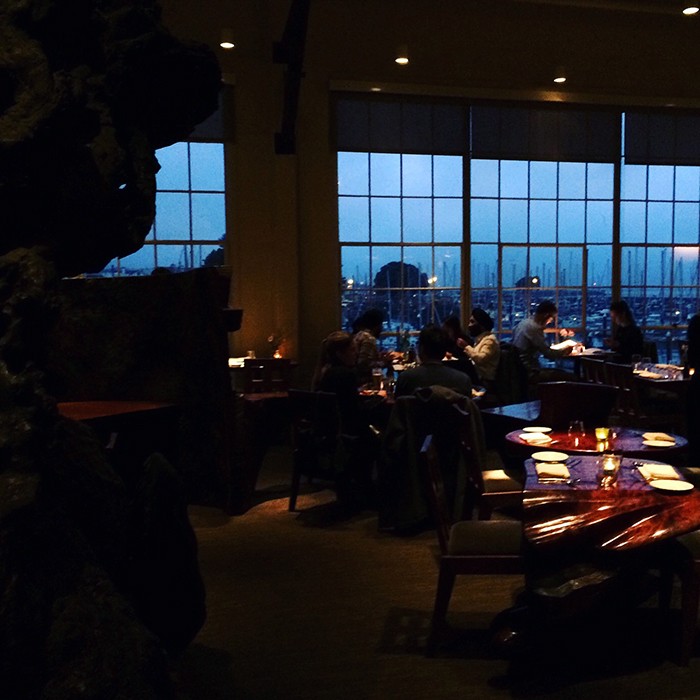 And there was plenty of dog time. Here’s Blue getting groomed: 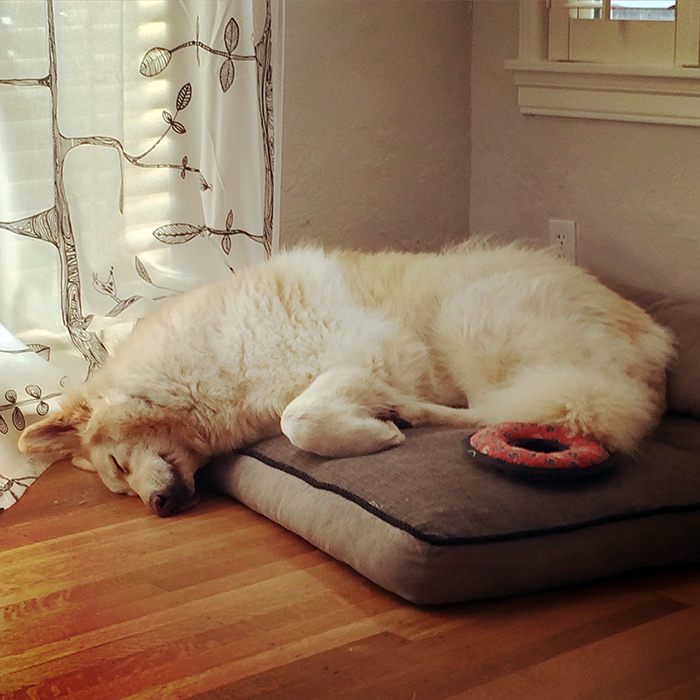 Austin did not like when Susan would take Wally for a walk. (Even though he would always go for a walk right after… )

We took a trip into San Francisco for some tourist fun. We visited the Nespresso store, then walked through Chinatown to check out Coit Tower

Despite the various years we’ve lived here, I’ve never actually gone inside. It was really cool. There are a bunch of murals from the 30’s in the lobby:

And the top of the tower is pretty cool in it’s own right. 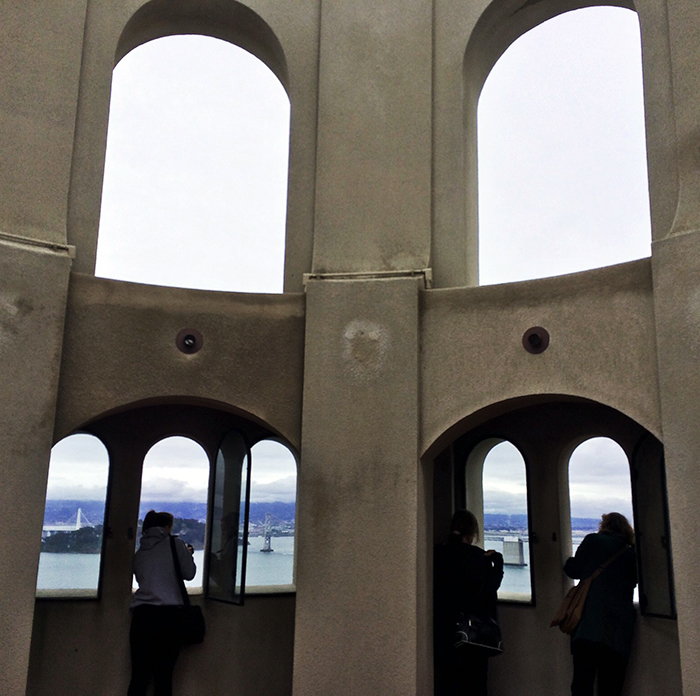 But the views of the city are the star of the show. Here’s Alcatraz:

The Transamerica tower and downtown SF:

And that was basically our visit. It was so much fun to hang out with Susan but I’m pretty sure it’s going to take Wally a few days to recover… 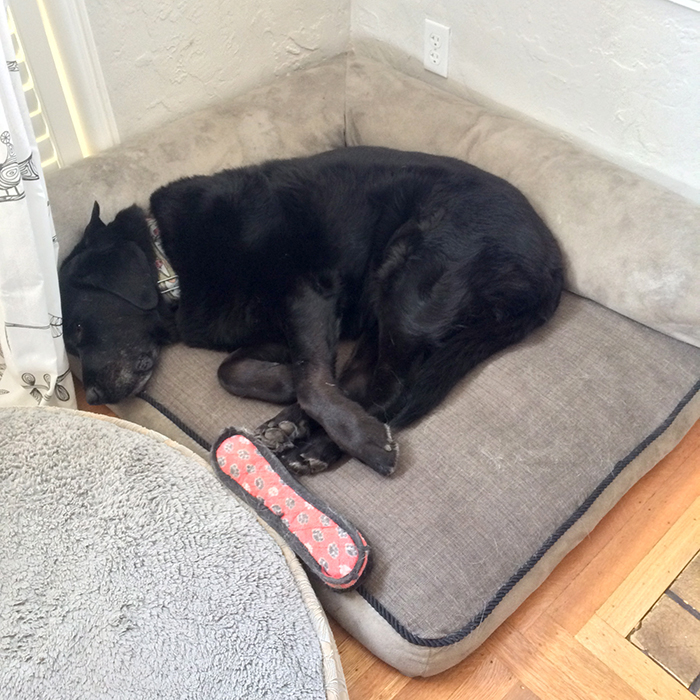 After some nice lazy days, we were up for a little group adventure. So, we decided to check out Waimea Canyon – aka “the Grand Canyon of the Pacific.” There was a fair bit of driving on some very winding roads, but our first viewpoint was pretty spectacular: 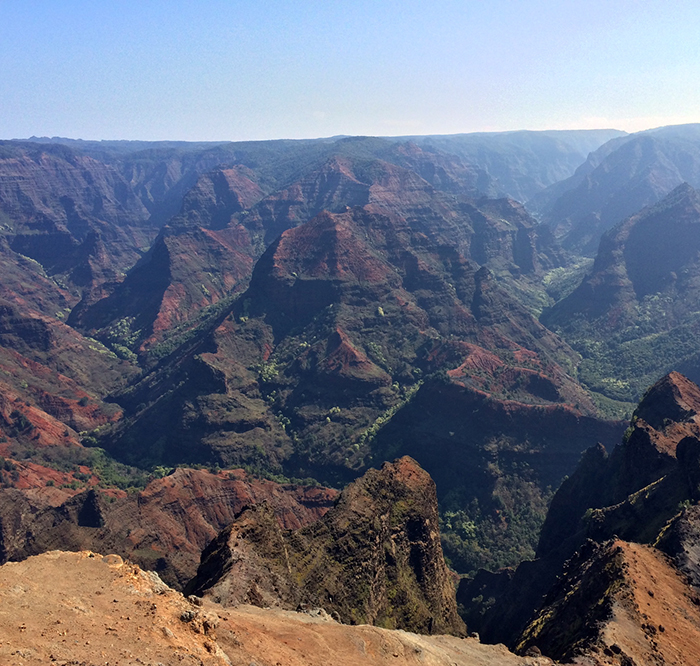 A nice lady offered to take our picture, so we have proof that we were there:

There was a guy dressed in traditional native garb, talking about various local traditions and lore. But he was dramatically upstaged by the baby pig that he brought with him for some reason. I mean, I took this picture:

We stopped in at the visitor center to look up a good hike. The lady who worked there recommended a good route, but also that we should continue up the mountain to the other viewpoints, since it was still clear. She was right, it was glorious: 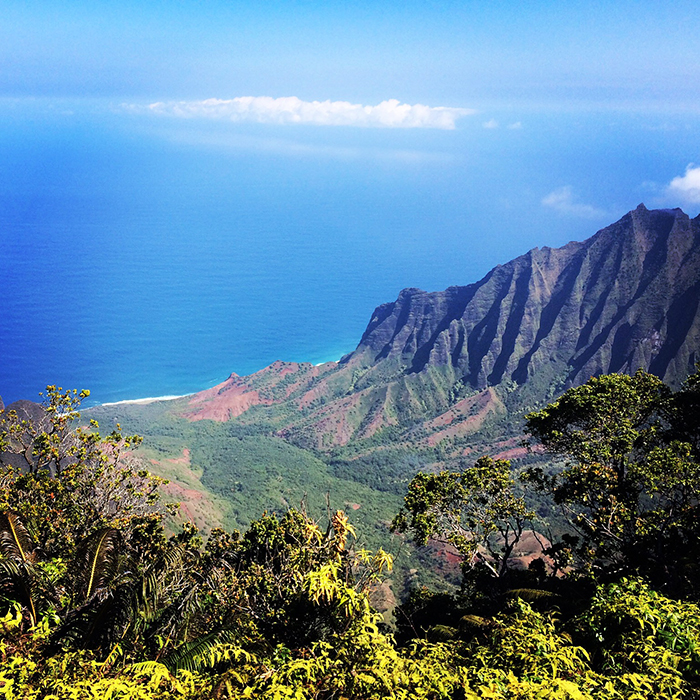 Clouds were just starting to obscure the view at the next viewpoint up, so we headed back down to start our hike. We’d chosen a nice trail to a waterfall, described as a moderate 1.5–2 mile hike. It started innocently enough… 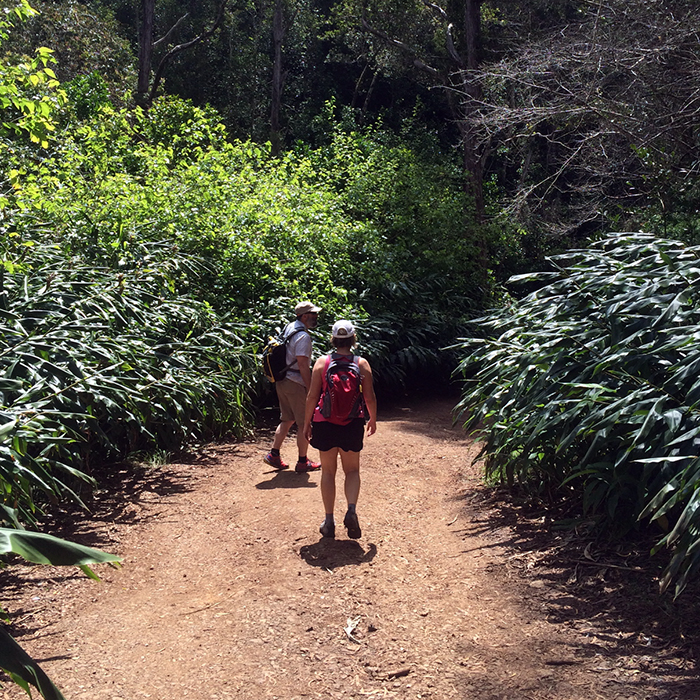 We walked through primordial forests and eventually came out next to the canyon. The textures and colors were mesmerizing:

The trail turned to volcanic rock that was kind of steep and a little bit scary, given that you basically can just go sliding down into the canyon if you aren’t careful:

But we all made it down safely and were rewarded with a very pretty waterfall view at the turnaround point:

Not pictured, the legions of crazy people who thought it would be fun to swim in the freezing cold water. It turns out, that’s not super fun. But watching them learn that definitely is. We had some snacks and headed back.

As we approached the volcanic rock part of the trail, we encountered a fairly large man, with one side covered in red dirt and scrapes with his knee wrapped in a bandana, very clearly in pain. His name was Ron (which would quickly become Big Ron) and he was with two younger men who turned out to be his sons. It was clear that they needed help, and trail karma is a thing, so we stepped up. The menfolk worked with his sons to help get him up the steep trail, while Jenn, Erin and I tried to warn people to get out of their way. It was slow going and stressful, plus Jenn had The Bird on her back in a pack. So, we opted to move further up the trail and figure out a plan.

For context, here’s where we met up with Big Ron, approximately a mile away from the road, over some fairly challenging terrain: 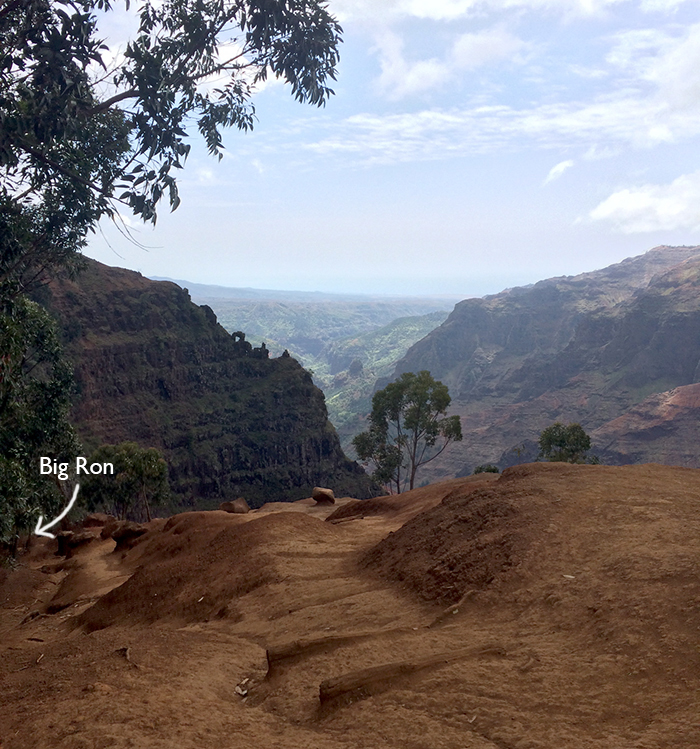 Erin had cell reception, so she called 911. We decided that the best plan was to get Amalie back to the car before she went into full-scale meltdown mode and then direct whatever paramedics/forest rangers were coming our way. Erin was still on the phone and not confident her signal would hold, so Jenn and I made our way back. Amalie was incredible, largely due to Jenn’s ability to keep a calm-voiced monologue going while hiking at a brisk pace up a hill with a fairly heavy weight on her back.

We made it back to the road. Amalie had fallen asleep on the way back, so we sat in some shade and waited for Erin. She showed up much faster than we were expecting and we discussed what to do next and whether we should drive one of the rental cars down the dirt road and get them closer to the trailhead. I was dubious that either car would make it down there, but thankfully, we heard sirens in the distance before we had to find out.

The sirens belonged to a giant red paramedics pick-up trip, loaded with rescue gear and four ridiculously hunky firefighters and their captain. (Seriously, it was like something out of central casting… ) The captain rolled the window down and asked “Which one of you is Erin?” At which point, Erin went over and gave them the lowdown on the situation. (Which might have included the quote “You guys look MUCH stronger than our middle-aged husbands… ” Amazing.) They headed down the dirt road to the trailhead and we loaded Amalie into her carseat and headed to the nearest town to get some lunch and wait for the boys to text us.

We found a surprisingly tasty taco spot (with glacially slow service) and had some lunch while we waited. Thankfully, it wasn’t too long before they texted and we were treated to a play-by-play of the rescue of Big Ron. It turned out that they were there for his other son’s wedding and (as we’d later learn when Jenn & Bryan ran into him at the airport while waiting for their flight home) he’d snapped his MCL and would need surgery.

He may not have been able to buy us drinks, as we’d often lament over the next few days, but he did give us a pretty fantastic story to tell, so god bless you Big Ron, wherever you are…

A while back, there was discussion of a repeat of our awesome trip to Hawaii. Originally, we were going to return to the awesome Lana’i house, but apparently the entire island is closed due the the Four Seasons undergoing some substantial renovations. So, we had to make due with Kauai. (I know, we suffer so… )

We got a better rate for flights if we left on Friday morning vs. Saturday, so we booked a single night at a cute little hotel in Kapa’a. Here’s the view from our lanai: 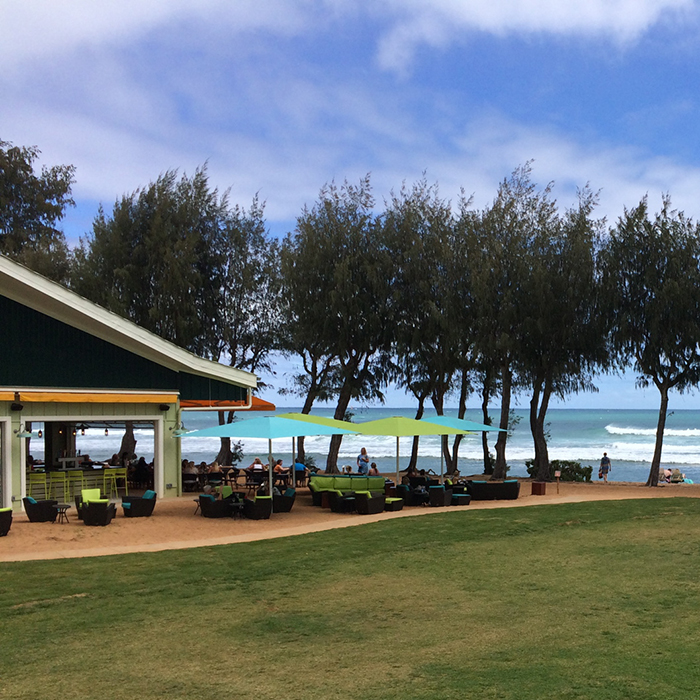 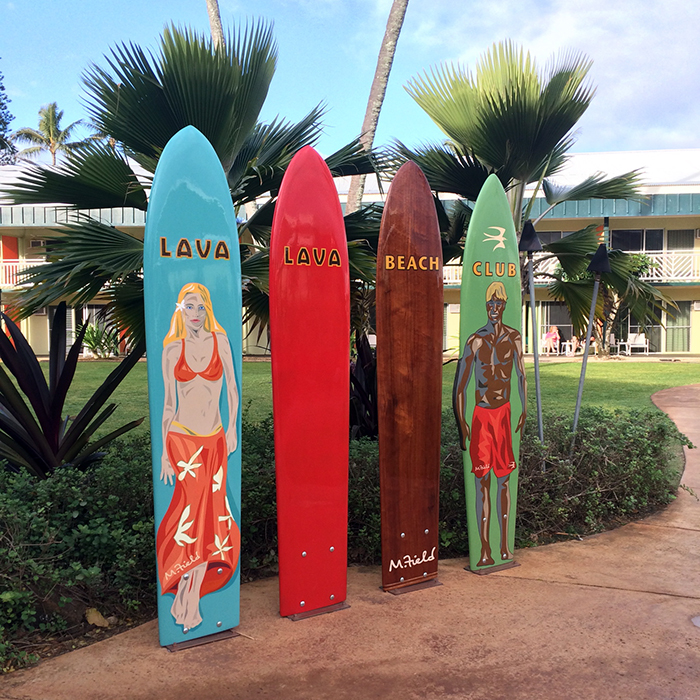 We headed into town to grab some lunch and explore a bit. We went to Mermaids cafe at Erik & Nerissa’s recommendation. Should you find yourself in Kapaa, definitely go. It’s insanely delicious. We got to see our first (of many) free-range chickens/roosters, courtesy of Hurricane Iniki.

Afterward, we wandered around and looked at the shops. We also tried out a local delicacy we hadn’t had a chance to have during our previous trip, Hawaiian ice. I’m officially obsessed: 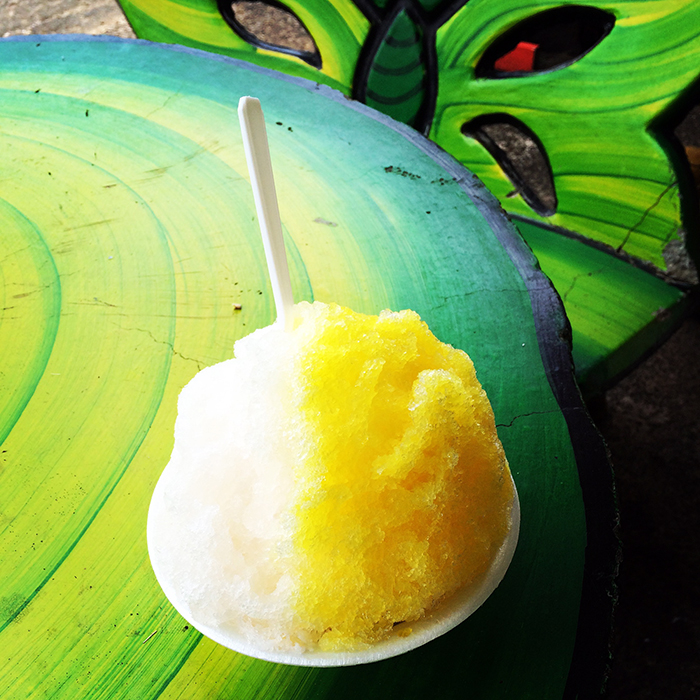 Plus, the fruit stand where we bought it was utterly charming: 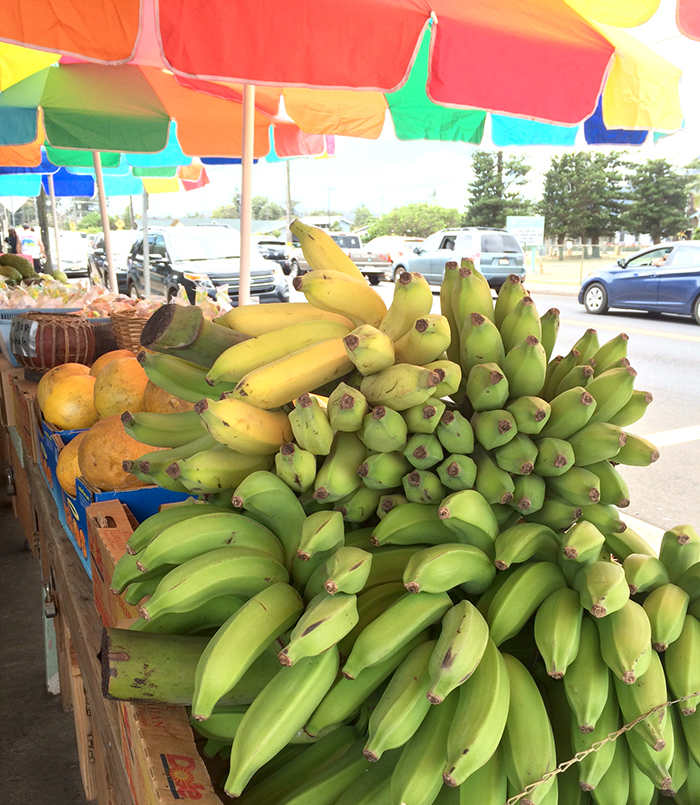 While we were sitting out front and eating our ices, the lady delivering avocados asked us how long we were staying and offered us some. We, of course, said yes. Score! This vacation was already off to a fantastic start and we’d been there for about three hours.

We headed back to the hotel to relax for a bit. I mean, you have to take the “Mai Tais by the beach” picture to post on Instagram:

Followed by the obligatory “we’re on vacation selfie”. I know, we’re the worst… 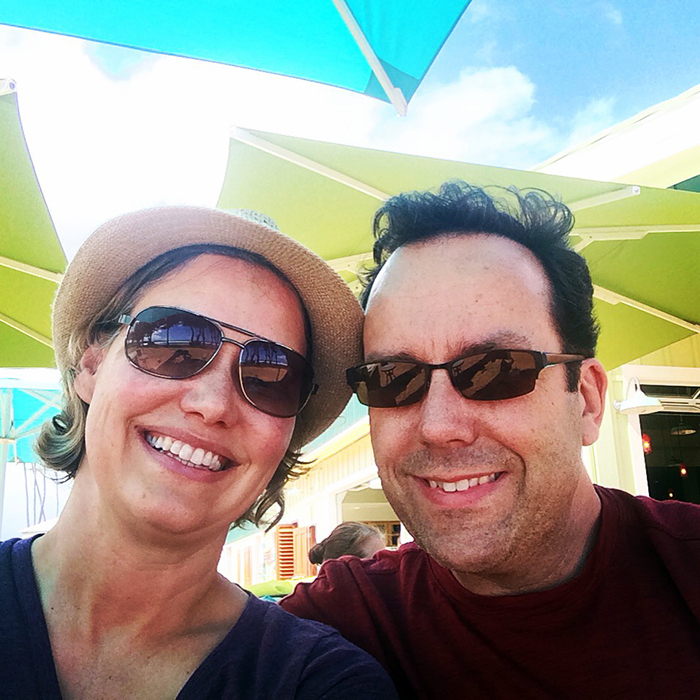 Mostly, we just enjoyed looking at this:

Erin and David had arrived a few days prior and were staying on the north side of the island, so we drove up there to meet them for dinner. Naturally, there were some stops along the way to gawk at the beautiful scenery: 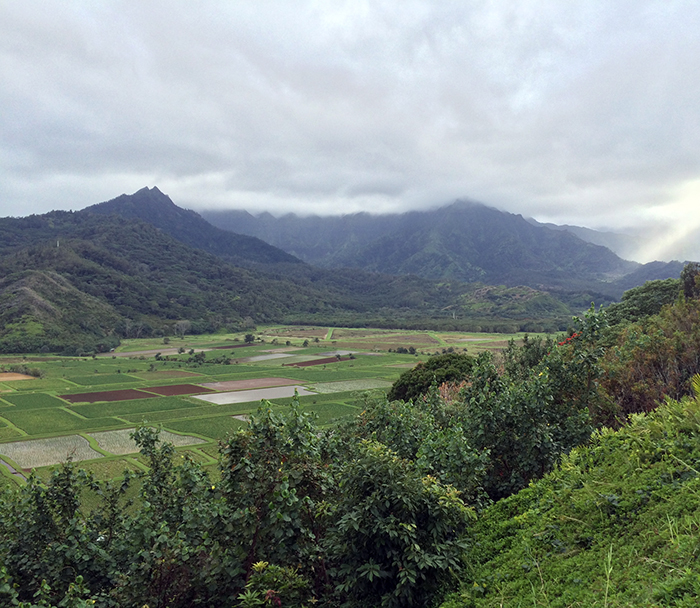 We had a magnificent sushi dinner, at a place recommended by the friend they were staying with. Then it was off to bed, since we’d been up since 5 am PDT. (Stupid early morning flights and time zone changes… )

The next morning, we went to check out a breakfast place that had good enough Yelp reviews for me to overlook the fact that it was called Kountry Kitchen. (I hate “cutesy” misspelled words in restaurant names.) But it was great, quirky and charming inside: 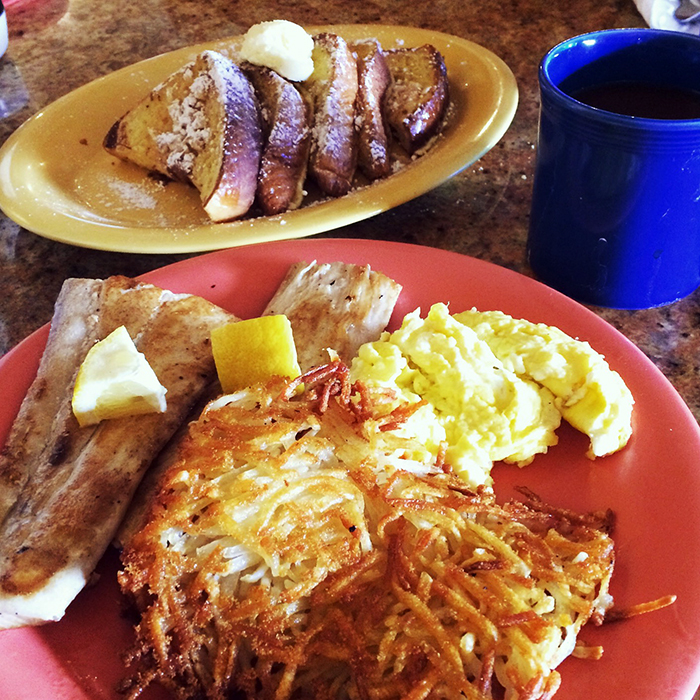 After breakfast I made T take my picture in front of the Lava Lava sign: 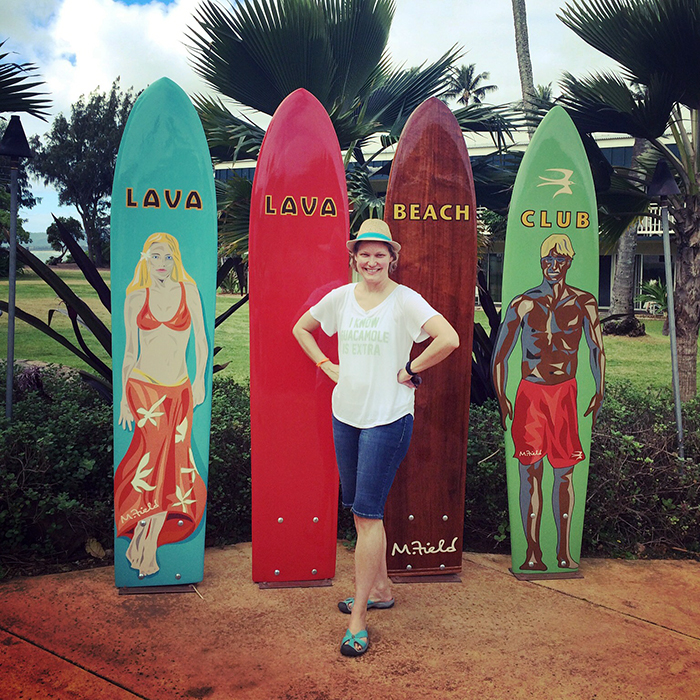 Then it was time to pack up and meet Erin & David at the rental car place. They dropped their car off, we added her as a driver to our car, shoved all of the luggage in the back and headed off to lunch and then the condo for check-in. Jenn & Bryan were arriving about the same time, so we text-coordinated and arrived at the condo at roughly the same time.

As usual, we were really roughing it: 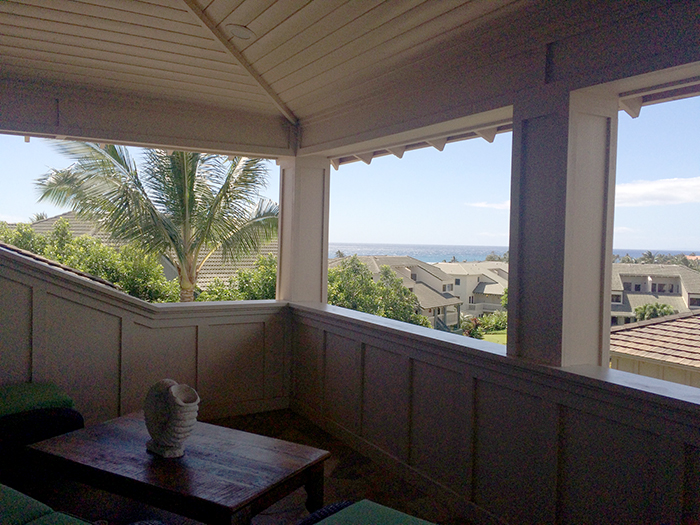 The view from the lanai was especially ridiculous:

The Bird taught a seminar is how to chillax: 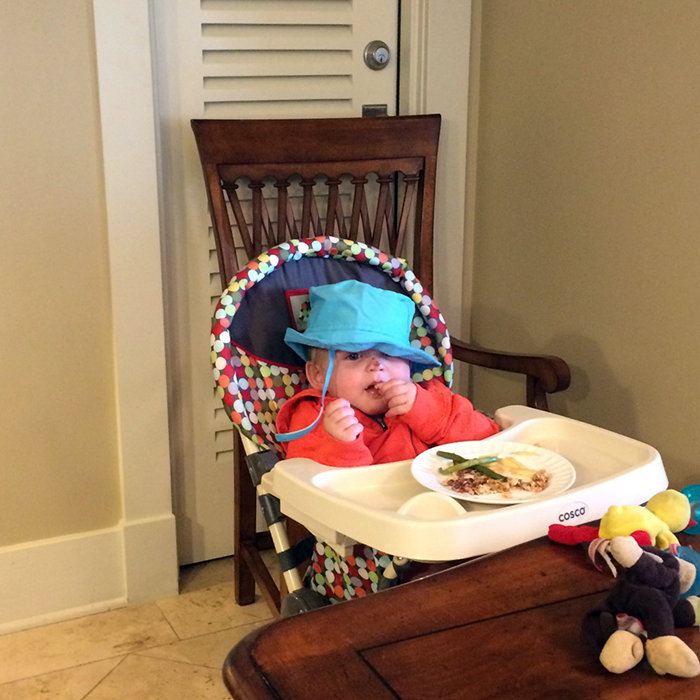 We took a little evening beach walk and met some local celebrities – the monk seals that hang out on the beach. I particularly liked that they are so lazy that this sign is needed: 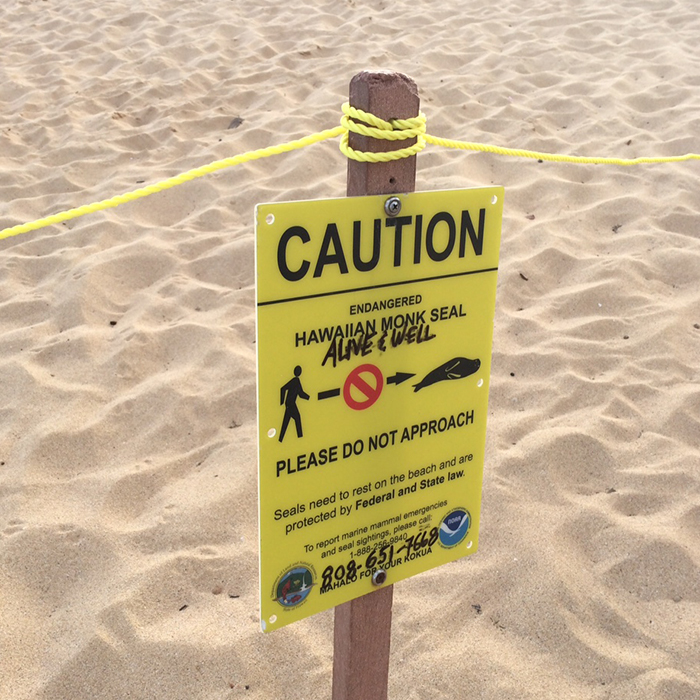 They are super cute though. Like big beach cats:

And then we finished the evening with lots of wine, laughter and a beautiful sunset: 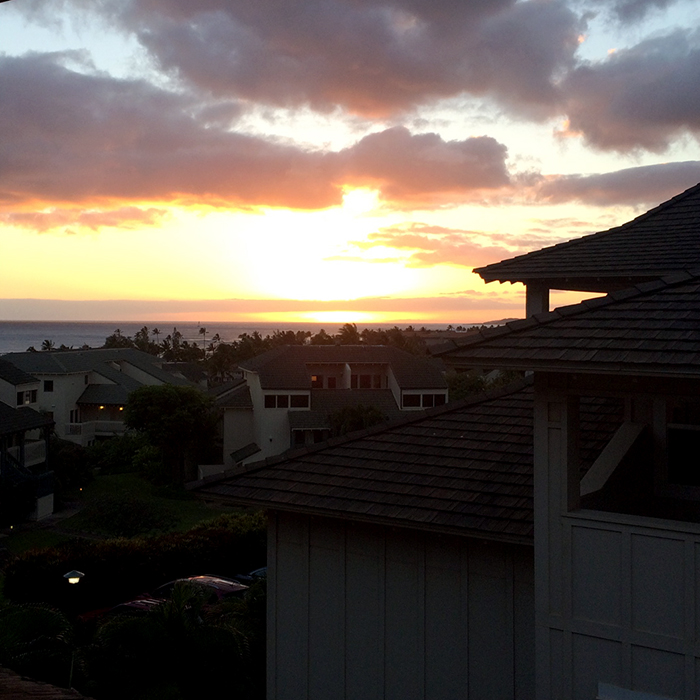 Not bad, Kauai. Not bad…