Since I’m not a particularly crafty person, I really appreciate those talents in others. Particularly, those who are skilled at recycling or repurposing old materials into something new and fabulous. So, in this spirit I have to give a shout out to M for her newest creation: 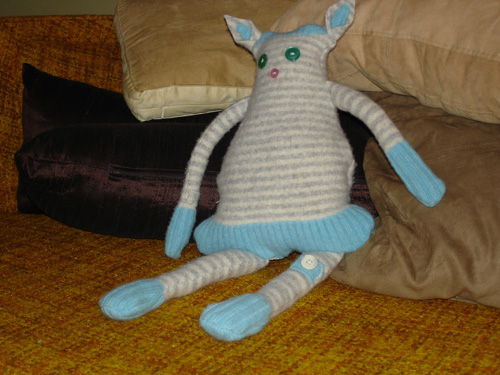 Isn’t that adorable? It makes me want to find some old sweaters and make one of my own. Almost… 🙂

This years first “big ride” was Cascade Bicycle Club’s Chilly Hilly Ride. It’s over on Bainbridge Island, 33 miles of February fun. My friend Erin and her boyfriend David came out to do the ride and I coaxed T to join in the fun. As a last minute surprise, M & J decided to ride the ferry with us and hang out on the island while we rode. This was especially surprising given the early start time – we picked them up at the ungodly hour of 7 am! Plus, since I forgot my camera, M was kind enough to shoot some photos for me.

I had no idea how popular this ride was, so I was pretty surprised to see how many folks were waiting for the first ferry: 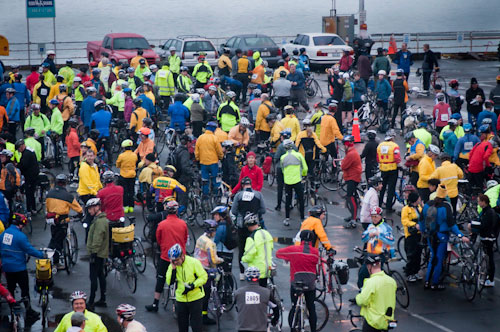 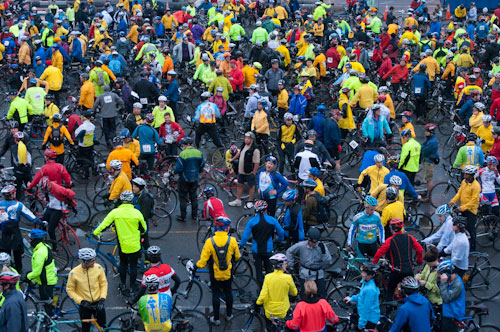 We found Erin & David surprisingly easily, given the number of people out there. Then once we’d loaded onto the ferry, we met up with M & J. T had made bagels on Saturday, so we had some yummy pre-race fuel which M was kind enough to photograph us eating… 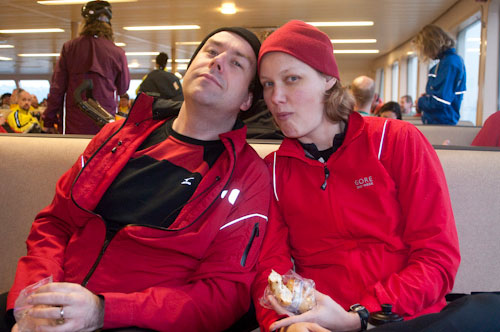 Finally, we made it to the island and the ride began. It was insanely crowded as legions of cyclists took to the roads. Eventually, things started to thin out a bit, though it was pretty full the whole way. The weather was a little drizzly, but wasn’t that bad, so the Chilly part of the name wasn’t so accurate but the “Hilly” part sure was. Holy crap! I’m proud that I managed to ride up all but one of the hills (a huge group of people basically dismounted right in front of me, making it pretty much impossible to ride through the chaos) although some times it was simply because I wasn’t coordinated enough to clip out. We saw every kind of bike & cyclist imaginable, including two guys on unicycles (crazy bastards!) For the most part, people were pretty nice except for the occasional douchebag (I’m talking to you, a$$hole triathlete deliberately passing people on the right on a crowded downhill section!) and despite my dislike of riding in crowds, it was pretty enjoyable.

After the ride, we met up with M & J and said good-bye to Erin & David: 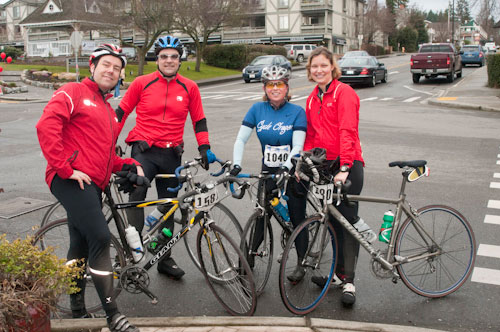 While we were chatting, some obnoxious pedestrian chose to complain to us about “those cyclists” and how difficult it was to try to drive today. Direct quote: “I mean, it’s bad enough that they have their own lane, but today they were all over the road.” All I have to say is read the sign, dude: 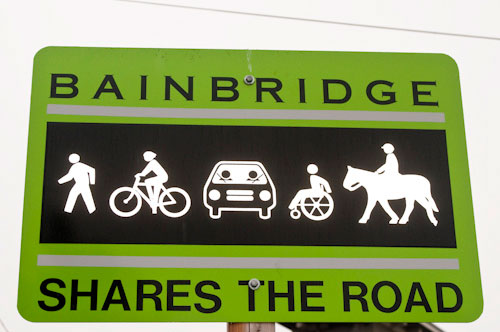 I knew people thought these things, but few of them have the cojones to say it to my face, so bravo Mr. Pedestrian. After a delicious snack/coffee at Blackbird Bakery (mmmm, multi-grain sticky bun) we hopped back on the ferry for the ride home. All in all, a very enjoyable outing.

T. decided to step up his baking game and make homemade bagels. Armed with Mark Bittman’s How to Cook Everything and advice from J, he prepped the dough and we invited M & J over for breakfast to taste (and critique) the results. Until M & J started making bagels, I had no idea of the whole process, so I shall share it with you here. First, the dough is made and the bagels are left to “retard” (Cue jokes about retarded bagels here… ) for a while, in our case – overnight.

Then, the bagels are boiled:

After this they are laid out on parchment:

and toppings are applied (not pictured) Then, they are baked and look something like this while they cool: 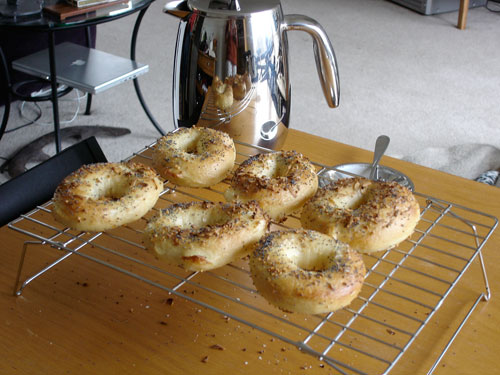 There’s disagreement within our household over the proper length of time for the cooling process. Apparently, for the best bagels you have to let them cool for an unacceptable length of time, so I tend to eat mine “too soon.” Since my bagel-palette is far too unrefined, I am willing to risk it.

The second batch wasn’t quite as lovely as the first, so we gave them nicknames while they cooled: 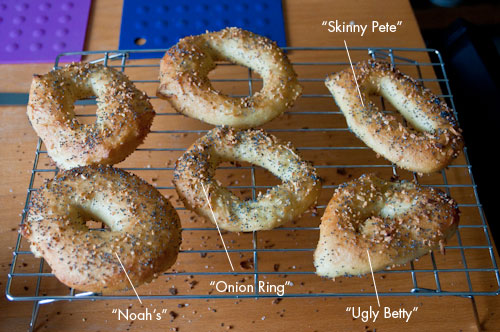 Unfortunate-looking as they were, they were still delicious and Todd’s first batch of bagels was declared a rousing success. The only naysayer was Wally, but we suspect that’s because his efforts to sneak a bagel off the table were thwarted by our vigilant watch:

Our friends M & J are carriers of the “baking virus.” It started with J, learning how to make bagels, homemade english muffins and a variety of delicious breads. Then M became infected, making her own breads and pizza doughs and it’s migrated it’s way through other friends. Now, T has caught it. T. did a lot of cooking when we were first dating, but in the nearly 12 years of marriage, he’s definitely gotten out of the habit so I’m delighted about it. I am very much looking forward to finishing long runs or rides with a hot bagel/english muffin/loaf of bread.

I missed documenting the first bread, and the first pizza dough (made with lemon-infused olive oil – oops!) but here is the very lovely second bread:

And here’s T posing with his bread: 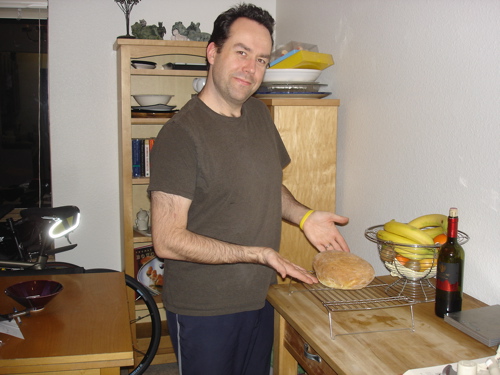 Meanwhile, M was attempting her first lasagna and invited us over for dinner to try it. Serendipity, right? With the added bonus of not having to think about what to have for dinner! Here’s M’s lasagna debut:

And of course, the obligatory posing shot: 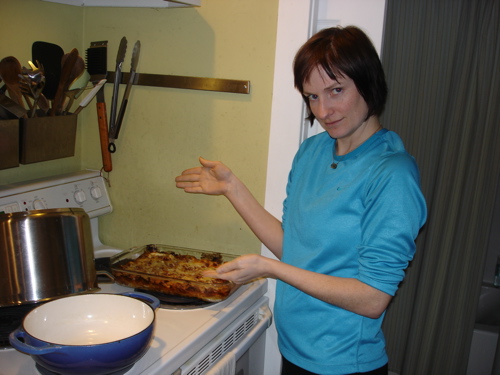 The results of both were delicious and complimented each other very well. I contributed salad fixings, so I wasn’t a total mooch but I must say I like this precedent. Obviously, I’m going to have to do A LOT more training but I think it will be worth it!

So, last night as we’re driving home we get a call from M. Apparently, her neighbor is moving and has a washer/dryer combo machine for free in the front yard. For those of you who aren’t city dwellers, this is one of the perks of urban living – when people get sick or things or don’t want to move them, they often just drag them to the curb and put a sign saying “Free” on them. It’s a pretty sweet deal for everyone – people get stuff/people get rid of stuff, win/win.

I was especially excited because I’d been really missing our in-apartment laundry facilities. We have a coin operated washer & dryer downstairs, which works pretty well, but there’s nothing quite as nice as being able to just throw a load in when you want and not have to find quarters, put shoes on, hope no one else is doing laundry, etc, etc, etc. We were excited that it was still there when we arrived and we set about figuring out how to get it home.

After some impressive maneuvering from T, we managed to wrestle it into the Saturn: 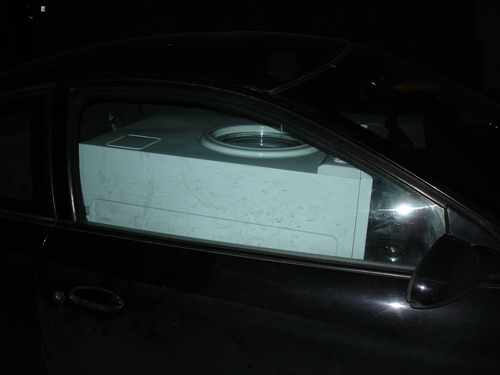 M was kind enough to drive me home and with the promise of Rock Band, we also talked her husband J into helping us carry it up the stairs. 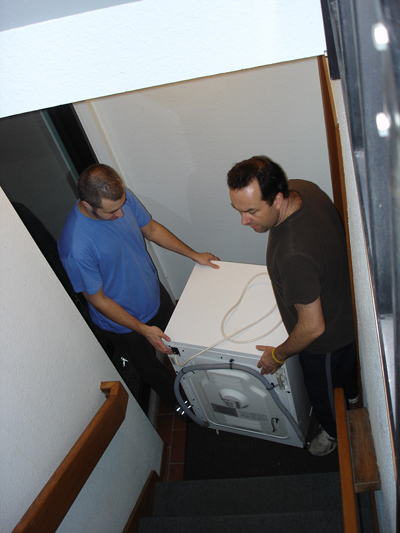 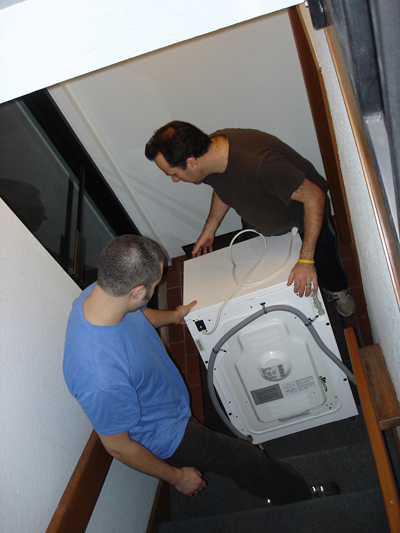 The boys managed to muscle it up the stairs and into our little storage closet with laundry hookups. We need to pick up a hose to connect it to the water supply before we can officially test it, but it powered up and the dryer spun when we tested that, so I’m hopeful that we will soon have a functional washer/dryer in our apartment. Here’s our new baby in it’s new home, I can’t wait to fill it with sweaty running clothes! 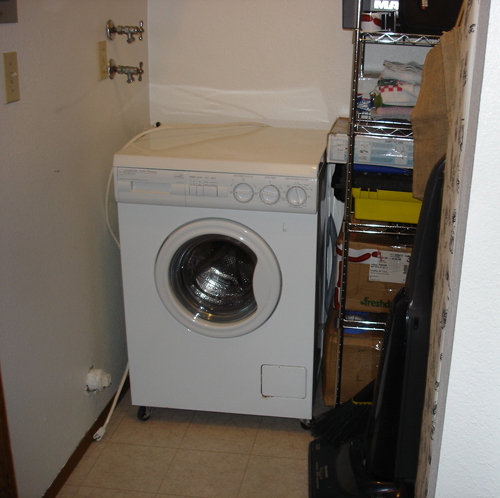 Today marks the one year point since I first created this blog. (Granted, it took me another 8 days between the first post and the second, so technically the 10th is a more accurate milestone.) It’s always funny to look back a year, and now I have a record of that process. There have been big changes – a new job, a new city, living close to old friends, signing up for an Ironman so I feel like I’ve made some progress. I will probably still have posts bitching about running in the rain, but I’ll try to keep the forward momentum going…

Thanks to those of you who actually read this thing, it’s always nice (and a little bit surprising) that people read these random musings. I’ll try to keep year 2 as entertaining as the first (or make it entertaining in the first place, whatever… )

It is weird to move back to a city you’ve lived in before, particularly if over ten years have passed in between. Last night, T and I went out to Kirkland to see Mike Daisey, a performer I worked with way back in 1997.

What’s funny is that after I worked with Mike and left Seattle, he became something of a local celebrity parlaying a job at Amazon into a book deal/one man show. He also ended up dating and later marrying a girl from the cast of our little show, Jean-Michelle which is awesome. They also ended up moving to New York about three weeks before I did. I actually saw an ad for his show in New York in 2003 and we were in sporadic contact while I lived there, but for one reason or another we never managed to connect.

Flash forward to 2008 and thanks to the miracle of Facebook, I was able to get back in touch with Mike and found out he was going to be in town, so we made the trek over to Kirkland. Entertainingly enough, this performance was about his getting married and moving to New York, so it basically filled in the gaps that I didn’t know about. I couldn’t be happier for Mike & Jean-Michelle. They deserve every bit of the success they’ve had and seem really, really happy. I’m pleased for the tiny part I’ve had in their lives and hope to keep in contact with them in the future. Oh, and should you ever have a chance to see Mike Daisey perform, you should definitely check him out, he is a master-storyteller and provides a very entertaining evening of theatre.