So, when we last left our intrepid author, she’d just finished crying on the boat ramp and was getting ready to head back to camp. I went back to transition and gathered up the majority of my gear. I left Slim there because the shuttles for bikes wouldn’t be running until later in the afternoon and I did not have the wherewithal to lug him up the steep walking trail back to camp. Todd was kind enough to carry my pack and I started my mental shift toward the new agenda for the day by looking forward to a hot shower.

As we got into camp, I ran into numerous team mates who were surprised to see me and had to tell the sad tale of what happened. Everyone was so unbelievably supportive and kind, which really lifted my spirits. My shower was magnificent and after a little chilling at camp, we packed up a lunch cooler, my little portable chair, some cowbells and pom-poms and staked out a good place to cheer for Catherine when she came by on the bike.

It was really awesome to cheer for the other cyclists out on the course. (And, to be honest, seeing how miserable some of them looked really took the sting out of not being among them.) I had an idea of when Catherine should be coming by and before we knew it, there she was. She looked surprised to see me and when I cheered her on, she said something to the effect of pulling the plug after the bike. I told her she was absolutely (effing) not and then Todd and I powerwalked down to the transition area.

Because I still had my race numbers, I could go into the transition area and found her fully changed into her run gear, standing in front of her spot. Having been in this situation so many times myself, it was easy to see that she just needed a little nudge and she was going to be just fine. So, I coaxed her onto the run course with a “just go out for the first mile, if it really sucks you can come back. Besides, what else do you have to do today?” And just like that, she headed out.

I texted our OTC teammate Betsy the situation and told her I was grabbing my bike and then would meet her to cheer Catherine on the run course. Todd and I rode the blessed shuttle up the hill and I released him to go nap/chill in the campground, grabbed my hydration pack full of anything Catherine might want when she came by, my chair, can of wine and cheering supplies and joined Betsy to wait for Catherine at approximately the halfway point of the run. There was a long hill that Betsy was planning to run with Catherine and I said I would do the same. After a little while a few more team mates joined us and we made quite a commotion when Catherine finally came into view. This picture says it all:

She looked so strong and steady, we were all amped up with pride and excitement for her. Betsy and I headed to the next viewing spot, right before the one-mile descent back to transition. It was great to chat with Betsy and get to know her better. Some more of our teammates joined us to high five her as she came by, all smiles.

The only bummer about the set-up was that there was no real way for us to get to the finish line in time, so we left Catherine to her well-earned triumph and headed back to camp for a group photo: 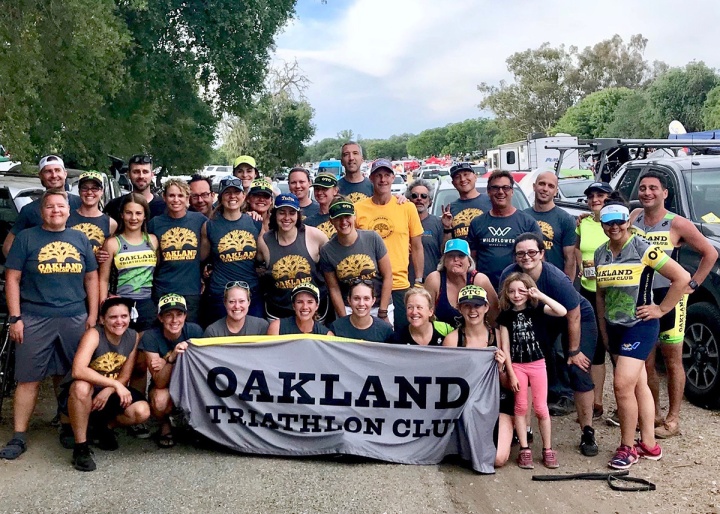 Clif was hosting an 80’s party, so soon our camp was filled with all sorts of rad fashion: 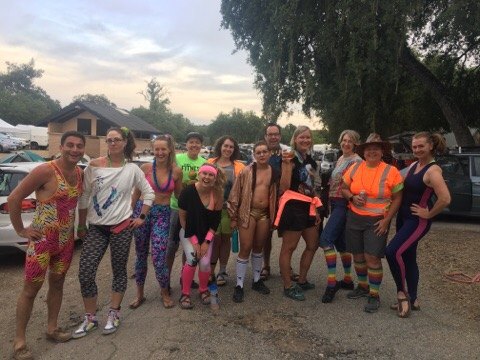 One of our teammates brought his costume box, so those of us who weren’t as prepared as Ms. Erica here could still join in the fun: 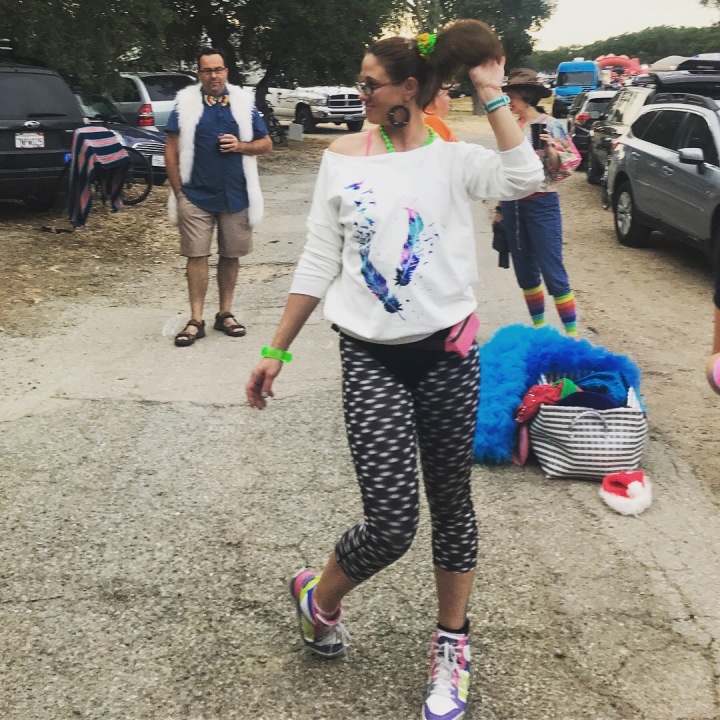 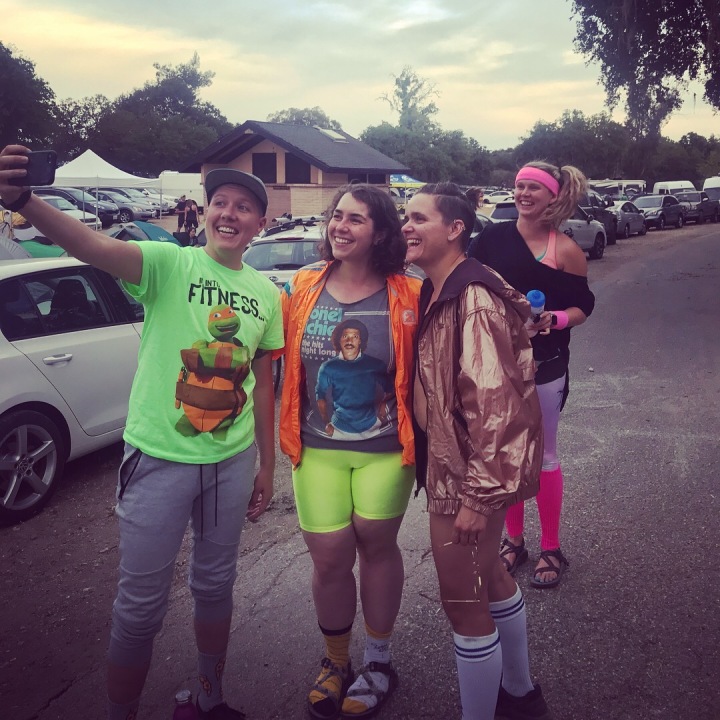 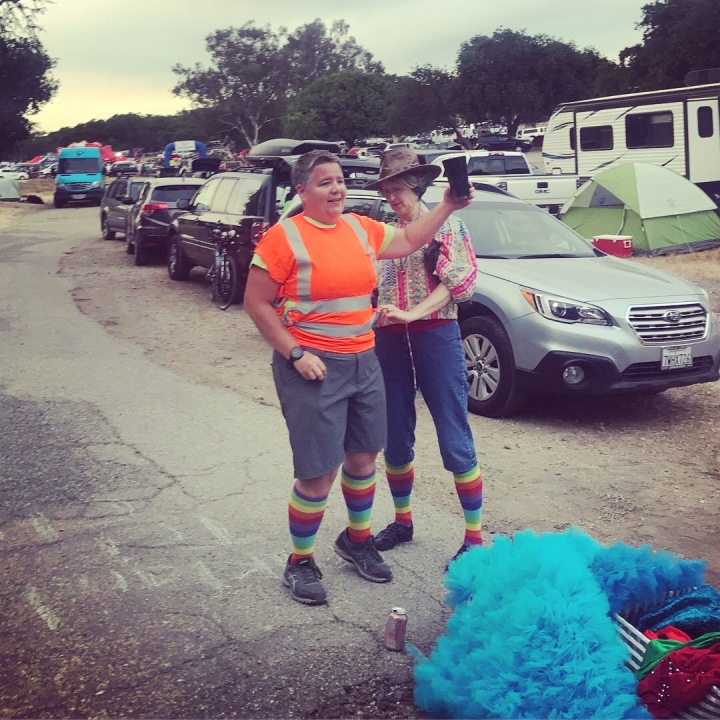 I hadn’t really brought a full costume for the party since I figured I’d just finish racing about the time it started. But I did find some crimped colorful hair extensions that I tucked into my bag. There was one black one that I pinned on Todd as a makeshift rat tail. So stylin’! 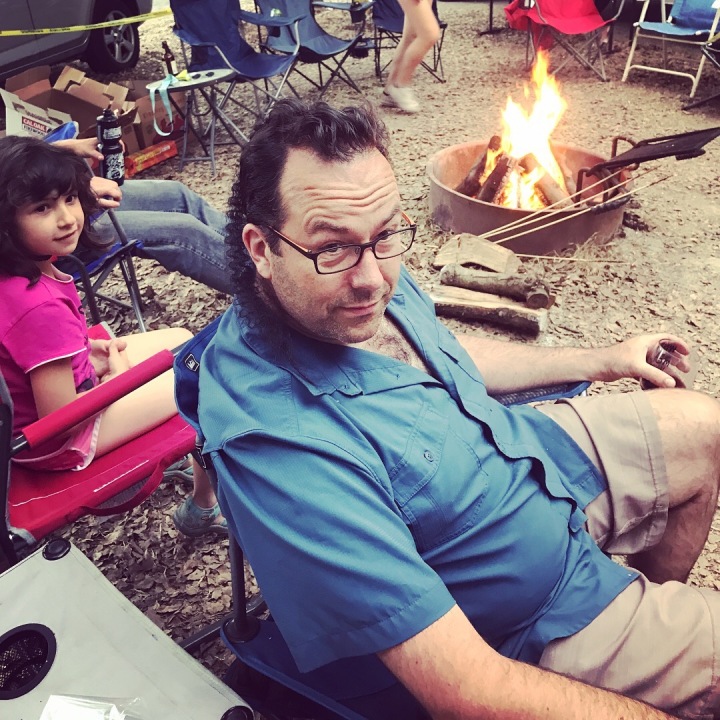 Sadly, the 80’s party was a little bit of a disappointment when we got there. They turned off the 80’s music for some country western band (?!?) so a lot of us abandoned the party to go spectate an impromptu beer mile happening in another part of the campground. It was fun to cheer on that insanity and then we headed back to camp. By that point, we could hear that the 80’s party had ramped up, but we were too tired to go back.

The next morning, Todd and I had a leisurely morning at camp and then headed down to cheer on the sprint and olympic athletes. It was such a blast to cheer for everyone and see OTC kick some major ass. We stationed ourselves in the same bike course spot as yesterday and got to see most of the olympic distance folks pass by on the bike. Then, we went back and packed up camp. Originally, we were told that the roads were closed until 3, so I was planning to pack up and then go down to the finish to cheer. But, after we’d packed up, we noticed cars leaving the campground and decided to press our luck. I had to catch a plane to North Carolina early the next morning, so any extra time to pack my suitcase and be at home was too tempting to pass up. I was super bummed to miss the finish line antics and hear everyone’s race stories, but I will plan better for next year and not have a stupid business trip right non the heels of this race.

As you might imagine, I am already planning ahead for next year. I definitely have unfinished business with this course and a head full of plans on how to improve. Stay tuned for Wildflower: the redemption edition post in 2019! Huge thanks to all of my OTC peeps. This would have been such a huge bummer of a weekend without you!