Erik & Nerissa had spotted some blackberries down by the dock, so we’d asked T to make some pancakes with them. He happily obliged, so Erik & I headed down to the dock, while Nerissa went to get some from a bush she’d seen in front of the house:

Erik’s height comes in very handy when picking blackberries, by the way: 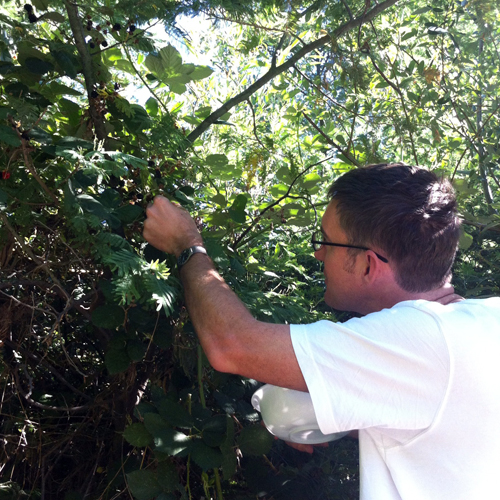 Breakfast was super delicious. Bacon, pancakes with a blackberry sauce and eggs. Too good.

After a little digestion time, we headed down to the river for a practice swim for me and some kayaking/inner tubing for everyone else. The river was delightful and very shallow in spots. The only bummer was that while I was holding a kayak for T, I kicked some piece of metal on the dock support and the arch of my foot hurt like a son of a bitch. It had a tiny cut and a bruise pretty much immediately. I tried really hard to not freak out and hoped that it would stop hurting soon.

After the swim, T and I headed over to the pre-race meeting/expo at Windsor High School. Unfortunately, the race meetings were every hour and we missed one by seven minutes. But it gave us plenty of time to wander around the expo and look at stuff. I wanted to get T this t-shirt: 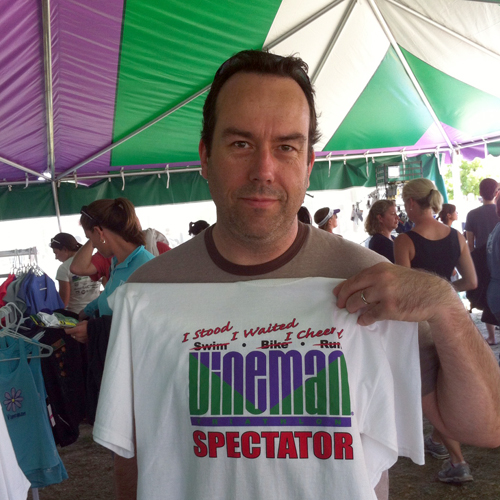 Finally it was time for the meeting, which was well run. It was informative and short (a rare combination for pre-race meetings!) Then we got to pick up our packets and set up our bike-to-run transition areas. Someone had drawn a huge chalk drawing next to my rack, which was an excellent landmark:

It was funny setting up my spot, knowing I wouldn’t see it again until tomorrow after so much biking and swimming:

Then we hit up Whole Foods for some dinner and post-race groceries and RiteAid for some first aid supplies for my poor foot, which was still really hurting. Since this is exactly the kind of “injury” I always get paranoid about before a big race, it was getting tougher to keep the freak-out at bay.

We finally made it back to the house to find that Heidi and her girls, plus M, J & baby Rowan had all arrived. Heidi took the girls for a swim from the dock, so M & I went down to keep her company. The boys handled the dinner so that we could just relax. I iced my foot and watched the girls jump off the dock. 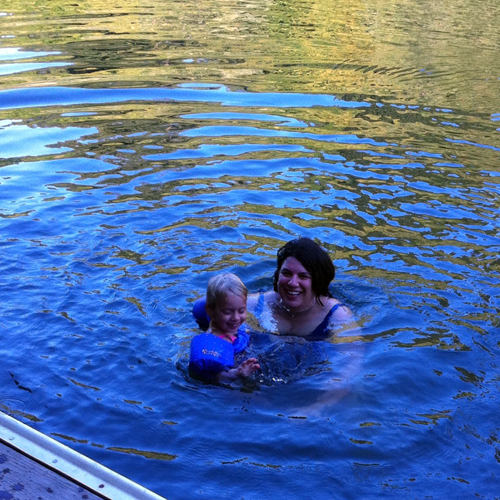 Kamryn had a couple of jumps where she basically landed on Heidi’s head. Nothing I do tomorrow will be as impressive as Heidi surviving that hit!

Dinner was out on our lovely deck and was delicious. There were burgers, salmon and chicken. Along with salads and a baked potato for yours truly. It was such a nice, relaxing way to spend the night before a big race.