Race morning started very early with a 4:30 wake-up call. Luckily, there was a bus from our hotel to the race start at 5:30, so we only had to eat, get dressed and walk across the parking lot, which was so great. Plus our bus was pretty empty compared to some of the other shuttles we saw loading up. Per usual, my stomach was full of butterflies, which made eating my hotel waffle difficult.

The bus ride was around 20-30 minutes and was filled with the usual nervous athlete chit-chat. When we got off the bus, we joined the hundreds of athletes gathered around the little campfires they’d made. It was really cool: 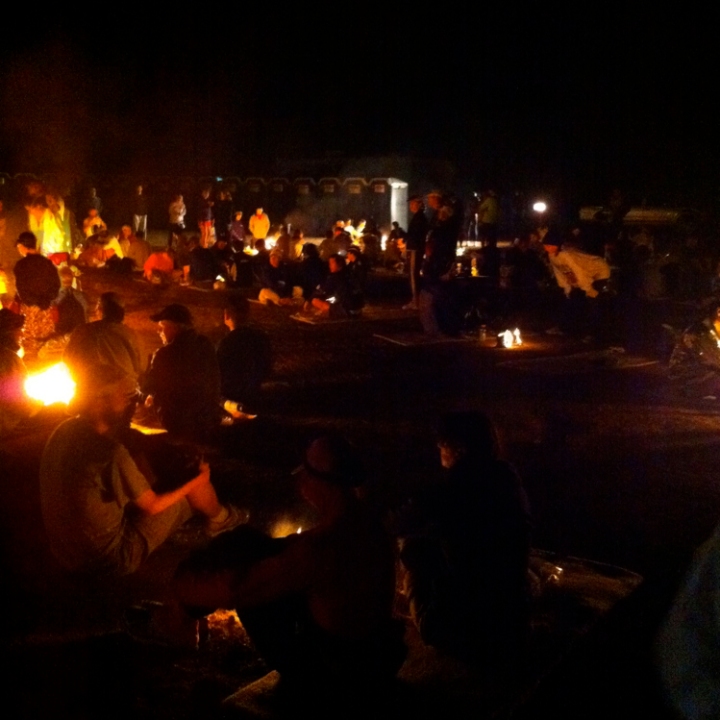 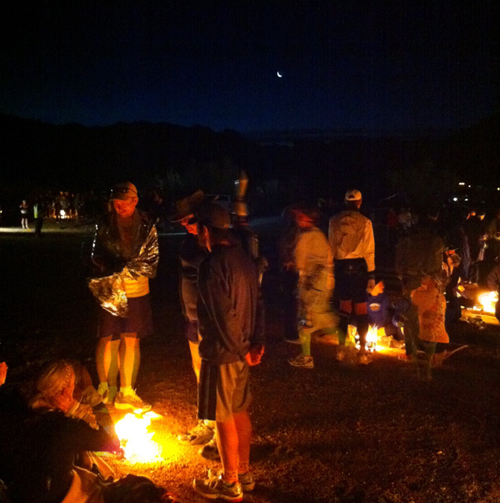 Some girls at our fire took M & my picture: 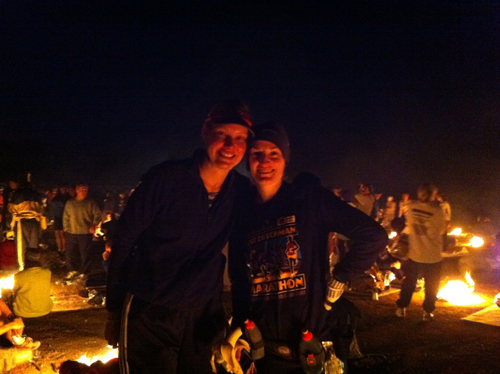 Don’t we look so happy? It’s a good thing we didn’t have a crystal ball! The sunrise over the desert was beautiful. 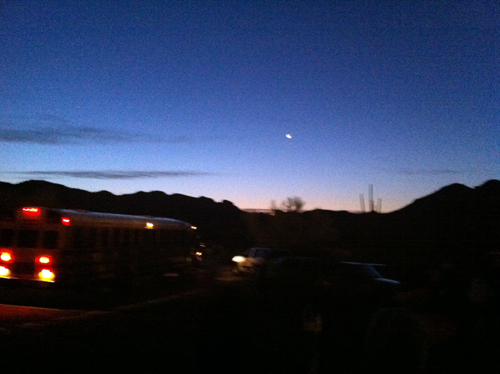 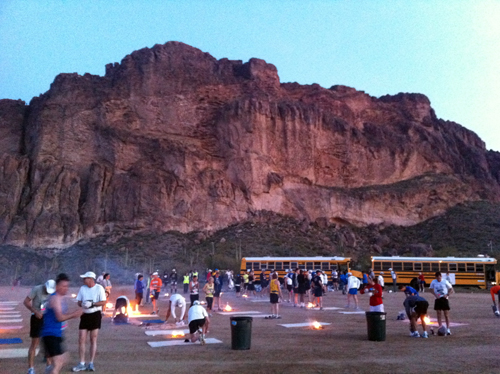 After a final porta-potty stop, we headed over to the start line. It was a very orderly start, we basically walked to our pace corral and the gun went off. And just like that, it was time to run a marathon!

The first six miles were on a nicely packed dirt road: 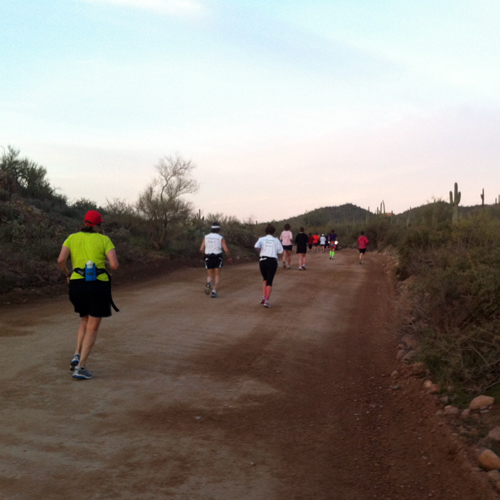 The scenery was cool, especially in the early morning sunlight: 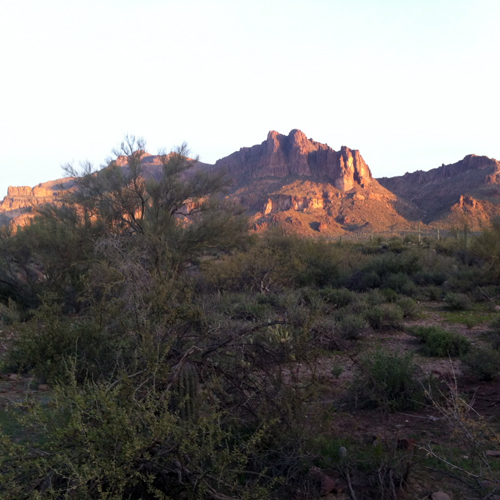 The best part was that there were cows grazing in that. (I wish I’d stopped to take a picture, especially of the cute baby cow.) It was funny to see cows grazing around the cactus and what-not. I felt great and worked hard to not go out too fast. The dirt road was easy on the legs, and it was gently rolling for the most part. Even when we transitioned to the pavement, I felt pretty good. The route ran right past our hotel, so J was able to sleep in a little bit and spectate easily. Then the race had a long false flat transitioning into the hilly section of the course. I was glad I knew the false flat was there, rather than thinking it was flat and my legs were dead.

My stomach wasn’t happy and I was having the same sorts of burping issues that I frequently have in triathlons, (I blame being bent over the bike for so long.) But I’ve never had the issue in a stand-alone run race or in any of my training runs, so it was a little worrisome. I had some Gas-X strips, but taking a couple of those prompted a minty flavored acid-reflux, so I stopped. As I continued, the stomach got more unhappy and I didn’t really know what to do, so there was a lot of internal debate (Should I eat something? Should I be drinking more? Or am I eating/drinking too much?) Eating more certainly didn’t seem to help and I drank a little water at each aid station, but they were 2 miles apart, so there wasn’t a lot of opportunity to drink too much more.

By the time I got to mile 13, which was the most rolling section of the course, my legs were already starting to hurt in ways that they didn’t usually start hurting until much later during our long training runs. This was concerning, because I knew how the pain thing generally built up over time. Then my brain lost focus and I took a tiny walk break to re-group. I pulled myself together and ran pretty steadily until around mile 15 or so. Then the mental demons were really starting to get to me. My stomach was really unhappy, my legs were hurting and the walk breaks began. It was here that I started to contemplate quitting. It was starting to feel exactly like Ironman Canada and I’d said from the beginning that if the race was anything like that one, I was quitting!

I tried to stick it out, in the hopes that it was just a wall and that it would pass. But it didn’t pass. The walk breaks got longer and when I walked the bulk of mile 16, I knew it was over. Every time I tried to run, my legs were killing me and I knew I didn’t have another ten miles in me. I knew I could walk it in, but I’ve seen that movie before, thank you very much. I texted J from mile 17.5 and told him I was done and that I’d walk to the mile 18 marker to wait for him to pick me up.

He offered me a ride back to the hotel, but I opted to go to the finish with him to see M finish her race, which I hoped was going well. She’d looked great when she passed me at mile 12, so I had no reason to doubt that she was doing great. I was very glad I did, because even though I knew I’d made the right choice about pulling out of the race, I was sad that I’d had to make that call. But watching people crossing the line and cheering them on and feeling the positive vibes made it impossible to feel too down. M was hoping for a 4:45/sub-five finish and as the clock ticked closer to her goal I prayed to see her come around the corner, but sadly five hours came and went. A few minutes later, we finally spotted her. She looked great: 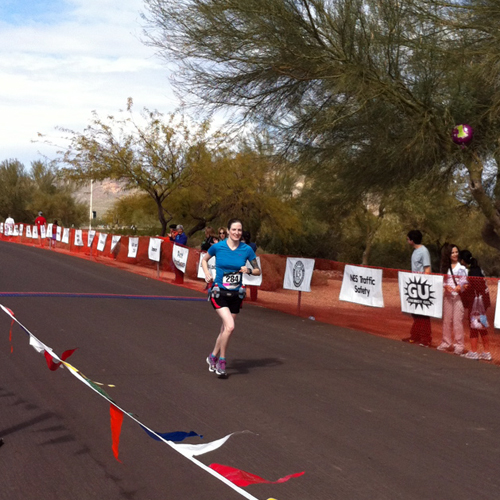 But when she crossed the line, she burst into tears and I knew immediately she had the same tough race I’d had. We commiserated over post-race pretzels and orange slices as we walked back to the car.

3 thoughts on “Surviving the Lost Dutchman”