This morning was the Dawg Dash 10k, held on the University of Washington campus (home of the Huskys.) M, T and I were all racing in preparation for marathon training, though for different reasons. T & I were trying to determine paces for speed workouts, M was trying to determine if she could run 6.2 miles without dying or having her mysterious foot pain get worse. My co-worker Reed was also doing the race in preparation for his first half-marathon coming up in December. So, as you can see, we were all very serious runners with goals and stuff.

The race ends on the track of Husky stadium, so we picked a post-race meeting spot next to the giant helmet: 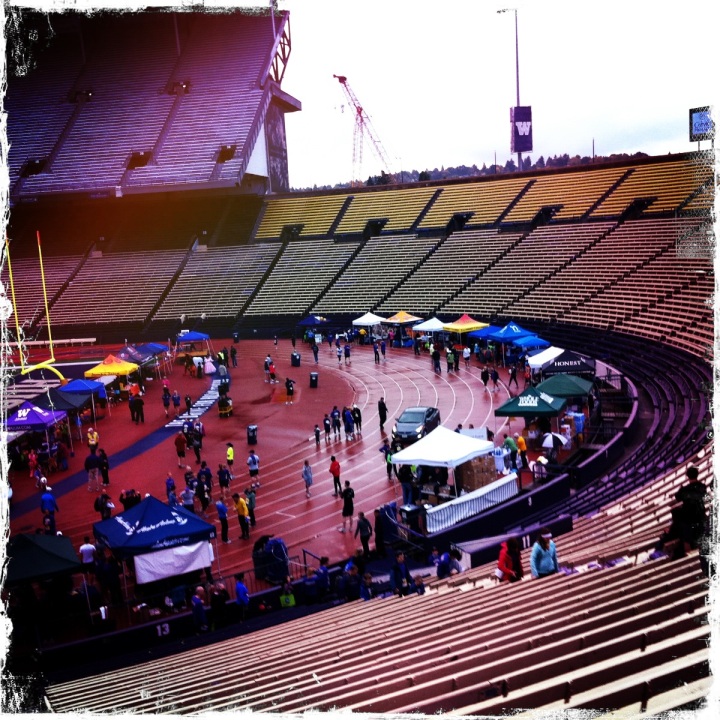 While we waited to meet up with Reed, there was a real ladies room (no porta potties for us!) and some time for stretching: 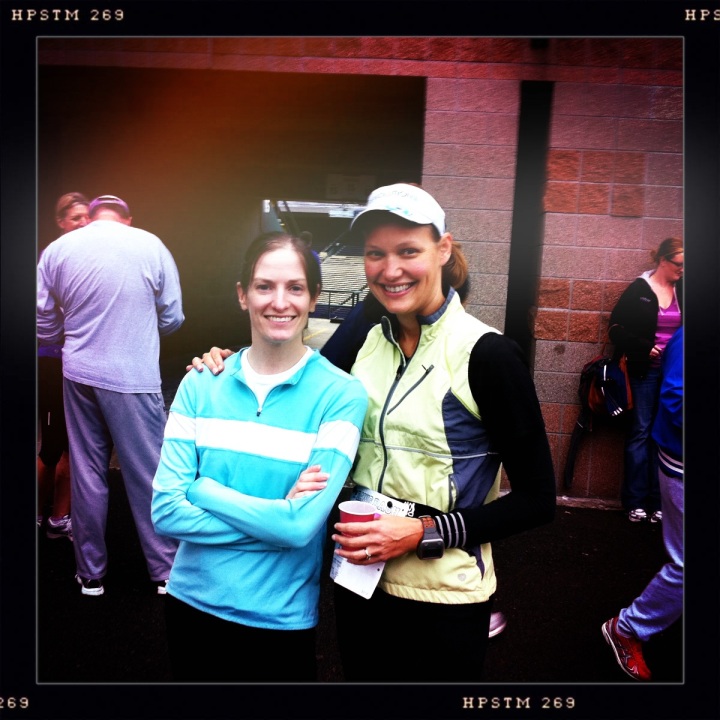 People were allowed to bring dogs to this race, so there were tons of cute canines around. We teased T that he was going to have a hard time focusing on the race since he’s genetically unable to not pet/maul any dog within 5 feet. Eventually we met up with Reed and headed for the starting line.

There were about 4,500 people signed up for the race, split between 5k and 10k distances I assume. They had pacing areas up, which was nice, except for the part where they went: 5 minute miles, 6 minute miles, 7 minute miles, Joggers (!) 8 to 12 minute miles. What. The. Hell? So, as you might imagine, it was quite a cluster. We lined up as close to the front of the cluster as we could, next to strollers and dogs. (Not kidding!)

Dear Dawg Dash organizers, if you could add two more “running” pace corrals for 8 & 9 minute miles and then have the slower folks, that would be super.

My goal was to push as hard as I could, since I’m a fairly big wuss when it comes to actually pushing myself pace-wise. I’ve never done a standalone 10k race, so I was curious to see how fast I could do it, even if it did hurt like a mother. The course was very rolling, which didn’t help. Not to mention the dodging of dogs and strollers. (The 5k course weaves in and out of the 10k course, so you end up with slower and slower 5k-ers to dodge. Not fun.) This picture of Reed finishing really just says it all:

(And he finished about 10 minutes ahead of me!)

By the time I got to the finish line, folks were strolling along five abreast across the whole race course. This made me mad and gave me the last bit of oomph to hustle to the line, even though I really wanted to lay down and die instead. When I looked at my watch as I crossed the line, I was shocked to see a time of 56 minutes and some change. Unfortunately, it turned out to be because the course was nearly half a mile short. (WTF? On the 26th running of the race? Seriously?!)

Apparently, inaccurate run courses are my thing this fall… But despite all of the races shortcomings, I had a good time and was proud of myself for pushing through a tough race where I was hurting pretty much constantly. M & T also did really well. It was fun to watch M sprinting down the line and she ran the whole thing, looking strong both times I saw her.

Look out Lost Dutchman, we’re coming for you!