The rest of my family was leaving today, but since our flight left early enough to be a pain in the ass, I’d scheduled an extra day in the city for T & I. I’d booked a hotel through Priceline and scored a 4-star Sheraton in Times Square for half the typical price. When we planned all of this, I was excited to have a day in the city with T. But the emotional toll the wedding had taken had me feeling like crap. As I sat at breakfast with my brother, Nerissa and my mom, I wished I was going home. But after a little tearful venting to T at the train station while we waited for our train into the city, I started to feel a little better. By the time we were walking to our hotel, I was actually glad we had this extra day (despite the fact that I HATE Times Square.)

We were able to check into our hotel right away, which was awesome. We took a few minutes to chill in our closet, I mean room: 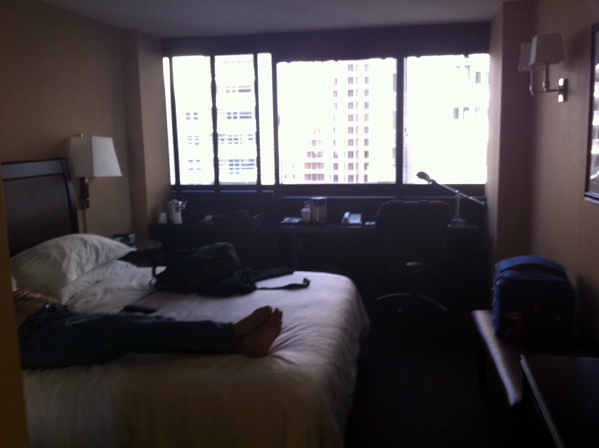 It was funny to be staying in a hotel in New York. We lived in Brooklyn for four and a half years and prior to that I’d stay with my friend Heidi in upper Manhattan, so we’d never had occasion to stay in a hotel. It was funny to be on the 36th floor and still have this be your view:

Because we’d had Saturday to do some of the things on our list, we were able to be a little more leisurely today. We walked down to Bryant Park to check out a new building on the skyline (the Bank of America tower) and catch the subway downtown. There was a new ping-pong table section in Bryant Park: 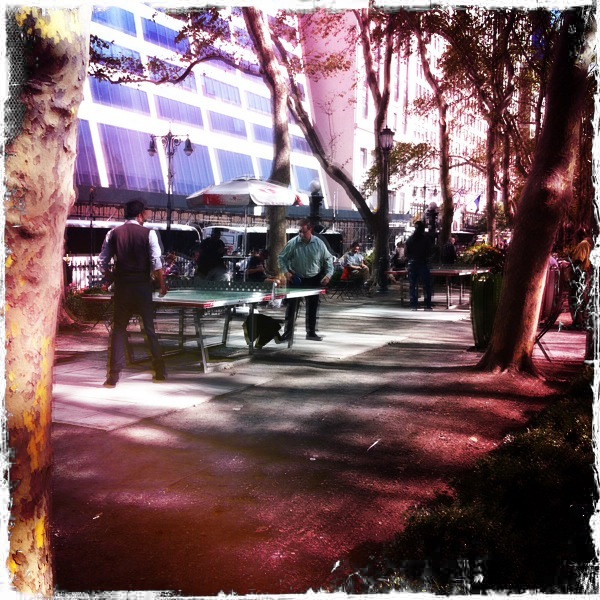 And because it was nice out, there were tons of people enjoying the park:

We then headed down to the subway. I couldn’t resist capturing a few shots for old time’s sake:

We grabbed a couple of slices downtown and I saw this cool old bicycle mural across the street that begged for a photograph:

We had a nice day wandering around, checking out a few shops that we missed or that were new since we’d moved away. (The Muji store was particularly cool. I highly recommend it if you find yourself in NYC.) We went back to our hotel room for a little rest and then wandered up into Central Park and the Upper West Side:

Since we were nearby, we had to pop into Zabars for some black and white cookies:

On the way back to the subway, we passed by this obnoxiously high-end dog boutique: 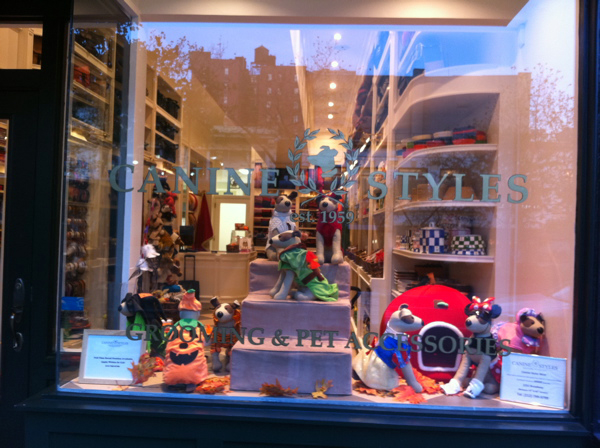 We were planning to go to our favorite sushi place for dinner. It had a new location since we’d last been there, but the food was just as good:

After dinner, we decided to check out the Brooklyn Bridge at night, since we’d never done so before. (Plus it gave us something to do before getting dessert at a favorite rice pudding place.) There was a huge number of tourists also on the bridge, so we didn’t have to worry about getting mugged, ha-ha! It had clouded over significantly and as we walked, we started to feel random drops of rain. As we turned around, there was a huge lightning flash over the city so we paused under the bridge support to watch the storm. Unfortunately, I couldn’t get a photo of the lightning, but it was still pretty out:

We hustled to the subway before the rain got worse. It wasn’t too bad getting there, but by the time we emerged from the other side it was pouring. Luckily, we only had to go two blocks and there were plenty of awnings. We picked up our dessert to go and headed for our hotel. I was hoping that the rain would abate while we headed home, but when we got off the subway again it was even worse. Standing under some scaffolding, it looked like a hurricane. There were huge sheets of rain coming down accompanied by a gale-force wind. It was insane. We were three blocks away from our hotel and there was no way this was stopping any time soon, so we had to make a run for it.

Within minutes, both of us were completely soaked. My contact actually washed out of my eye from all of the water that hit my face. So, I was running with one eye closed and behind me I could hear T laughing his head off, which made me laugh. (It’s really hard to run when you’re laughing.) People were huddling under awnings and scaffolding and as we ran by they either cheered or looked at us like we were nuts. (Not a tough argument.) By the time we made it back to the hotel, we looked like we’d gone swimming fully dressed, it was completely nuts.

But after wringing out our clothing and a hot bath, we got to watch a new episode of Dexter while eating rice pudding in the king-size bed. (Is it sad that this is the pinnacle of indulgence to me? Probably… ) I fell asleep to crazy lightning flashes only to be awoken at 2:30 in the morning to T calling the front desk to report someone in the hall way banging on doors. I couldn’t hear what was going on, but according to T some crazy drunken dude was banging on doors and telling security his name was Shawn Burton and he had a ticket to this hotel. After all of the crazy things we’d wake up to when we lived there, it was the perfect farewell from New York City.

2 thoughts on “I heart New York”